STOCKHOLM--(BUSINESS WIRE)--Oriflame, one of Europe’s leading beauty brands, today announced that its successful partnership with the WTA (Women’s Tennis Association) is now to be global. The sponsorship, which previously covered Europe, Russia and the Commonwealth of Independent States, the Middle East and Africa is now expanded to include the Americas and Asia-Pacific.

Oriflame has been the official cosmetics partner of the WTA since 2011 and the new agreement extends the partnership through to the end of 2014. Like Oriflame, the WTA performs on a multi-cultural stage, with players coming from 96 nations.

Oriflame will again sponsor the season ending WTA Championships in Istanbul, with prominent on court and tournament branding; including traditional signage as well as a significant presence in the digital space.

Tennis is the leading global professional sport for women and Oriflame’s approximately 3.6 million consultants have expressed a strong affiliation with the WTA through this partnership. Recent research shows that the level of awareness, perceived fit and pride amongst Oriflame consultants around the partnership is very strong. Oriflame’s sponsorship has also introduced the brand to potential new consumers, with almost 400,000 global fans joining the WTA Oriflame Facebook fan page to date.

Michael Cervell, Senior VP Global Brand & Communications and Strategic Business Development, Oriflame, said: “We at Oriflame are excited to continue our successful partnership with the WTA, an organisation which, like us, focuses on providing women with an opportunity to be successful, beautiful and confident, along with a platform to pursue their dreams.”

Founded in 1967, Oriflame is a beauty company selling direct in more than 60 countries. Its wide portfolio of Swedish, nature-inspired, innovative beauty products is marketed through approximately 3.6 million independent Oriflame Consultants, generating annual sales of around €1.5 billion. Respect for people and nature underlies Oriflame’s operating principles and is reflected in its social and environmental policies. Oriflame supports numerous charities worldwide and is a Co-founder of the World Childhood Foundation. Oriflame Cosmetics is listed on the Nasdaq OMX Nordic Exchange. 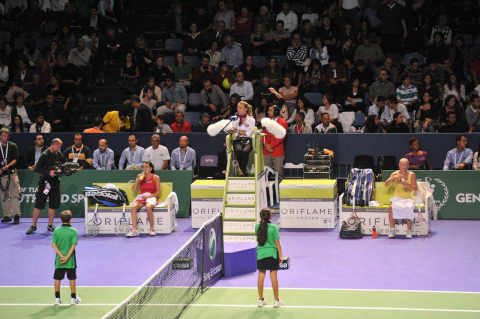 Oriflame on court with Caroline Wozniacki and Agnieszka Radwanska at the 2011 WTA Championships in Istanbul (Photo: Business Wire)