At the Gala Awards Ceremony in Shanghai on Thursday 11 November, eight outstanding companies were singled out as award winners. This was in recognition of their business achievements this year, which have contributed to the strengthening of Australia-China trade and business relationships.

"It was an honour to be a part of such a highly successful awards program recognising and rewarding Australian companies operating in Greater China", says Ms Kate Pollitt, Executive Director, AustCham Shanghai. "The diversity of industries represented as finalists highlights the depth and strength of Australia-China business. The Australian Chambers of Commerce across the region are proud to support the awards and give these successful companies the recognition they deserve for all their hard work and initiative."

Twenty-one finalists from across Greater China and Australia were represented at the Gala Awards Ceremony in front of the His Excellency Dr Geoff Raby, the Australian Ambassador to China.  More than 250 senior business executives came together to celebrate the contributions and excellence of Australian business in China and hear from special guest speaker for the evening businessman and triple gold medal Australian swimmer, Mr Grant Hackett OAM.

The 19th annual awards AustCham Australia-China Business Awards will be hosted in Hong Kong in 2011, completing the awards tour of Greater China after they were hosted in Beijing last year. 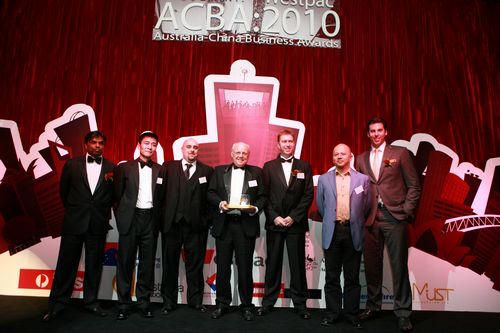 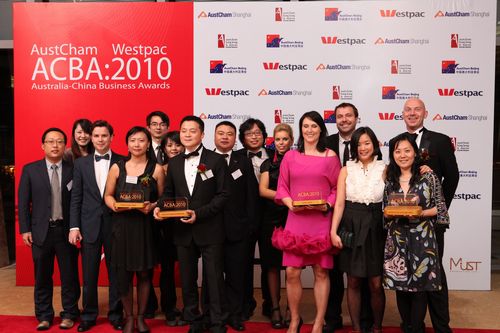 Winners of the Australia-China Business Awards

Recognises an Australian business, with more than 100 employees, that has demonstrated the most outstanding performance in Greater China over the past year.

Recognises an Australian business, with fewer than 100 employees, that has demonstrated the most outstanding performance in Greater China over the past year.

Recognises an Australian business that has demonstrated entrepreneurial excellence in Greater China over the past year.

Recognises an Australian business whose significant innovation has resulted in the successful development of opportunities in Greater China over the past year.

Recognises a local business in Greater China that has shown excellence in promoting or marketing an Australian product or service.

Recognises the successful implementation of sustainable development programmes and processes by an Australian company in Greater China.

Other award categories are:

Recognises one of the finalists for merit and considered by the judges as deserving a special mention.

Entrants are required to provide submissions outlining their business successes, with finalists then undergoing a personal interview before a panel of judges. The judging panel includes the Senior Trade Commissioner for Austrade and a representative from three Australian Chambers based in Greater China.

Cockram Projects General Manager for China, Greg Mithen is proud of the company's history and expertise in offering niche construction and engineering services which have their founding in Australia and are now being

applied to Greater China. Starting in Melbourne in 1861, the company has constructed such famous landmarks as the Windsor Hotel, the Princess Theatre and the Sidney Myer Music Bowl.

Leveraging from expertise gained in Australia, the company constructs specialist research and development, pharmaceutical and food manufacturing facilities for companies such as CSL and Pfizer. Cockram Projects expanded into Greater China in the early 1990s to construct and manage projects end-to-end for multinationals such Pfizer, Dow Chemicals, and McCains.

In 2010 Cockram Projects have continued to expand their offices and operations to a China scale. With increasing demand for local research and development and world-class pharmaceutical, microelectronics, and food and beverage manufacturing facilities, Cockram is able to multiply its Australian experiences. The company is a critical link in the process that allows production of life saving medicines that improve the lives of millions of Chinese people and people around the world.

Cockram recently secured a contract for the Novo Nordisk Filling Plant Project in Tianjin worth US$300 million. The facility will allow Novo Nordisk to meet the rapidly expanding demand for insulin products in China. The filling site will comprise formulation, filling, inspection and packaging of Penfills, FlexPen (pre-filled insulin pens) and vials. This project complements other projects for companies such as Baxter Healthcare who manufacture renal products and Fresenius Medical Care - a world leader in dialysis care.

Cockram Projects excellence in this category was demonstrated through the strong growth and expansion in China based on Australian expertise, a strong corporate culture that has translated to China through impressive staff retention rates and an exemplary safety record.  No mean feat in China.

David Laris Creates is a development company focused primarily on the food and beverage industry. The company's services include concept creation and development, execution support, ongoing management, creative advice and direction, analysis and consulting, and branding and image consulting. David Laris Creates advises and partners with third party investors, and owns and operates its own food and beverage outlets.

Wagas is a rapidly expanding multi-award winning chain of cafes in Shanghai serving gourmet sandwiches, coffee, salads, pasta, smoothies and cake. In addition to the café chain, the company owns and operates restaurants, a bistro, bakery and bakery chain.

CochlearTM is the global leader in implantable hearing solutions. It has a dedicated global team of 2,200 people delivering the gift of sound to the hearing impaired in more than 100 countries. The global headquarters and main manufacturing site is in Australia, and Cochlear's business activities are present in every province in China.

Kakadu is an Australian restaurant in the purest sense. It serves food and beverages that are easily recognised as modern Australian cuisine, such as Australian steak, lamb, emu, crocodile, barramundi, pavlova, bush spices, Australian wine and beer. Kakadu is host venue for AustCham Shanghai's weekly Aussie Drinks Central, and received the Wine Australia Restaurant Award in January 2010 for demonstrating leadership in the promotion and education of Australian wine.

The Anken Group are doing big things for the environment and the community in which they live. The company focuses on the renovation and transformation of existing buildings for mixed use, commercial and retail use. They have combined all aspects of sustainable development into living examples of what can be done with some grit and determination.

ANKEN is an innovative real estate company using sustainable practices and design to build and manage unique destinations for the Shanghai market. Not only has The ANKEN GROUP turned the building spaces into business incubators they have done everything possible to make both the environment and community sustainable. The group has been determined to seek and develop their own sustainable solutions that work for small business owners such as themselves.

The Australian Chambers of Commerce in Shanghai, Hong Kong and Macau, and Beijing have a long-term commitment to supporting and promoting excellence in Australia-China business.

Together, through the annual Australia-China Business Awards, they recognise and celebrate the diversity and strength of Australian businesses delivering products or services to the Greater China region. Now in their 18th year, the Awards are highly contested and attract an extremely high calibre of nominees from companies based in Greater China and Australia. ACBA finalists and winners are promoted extensively to media, government and leading business decision makers across Greater China and Australia.

The Awards were held in Hong Kong for the first 16 years. In 2009 they moved to Beijing, and in 2010 they will be held in Shanghai. In the years to come, the Awards will rotate between the three major Greater China cities.

AustCham Shanghai has supported successful businesses to establish and promote themselves in the Greater China market since its foundation in 1994.The Chamber currently supports 300 corporate members and a wide-ranging Australia-China business network.

The China-Australia Chamber of Commerce (AustCham Beijing) provides members with the information, resources and contacts to succeed in China. Its overriding goal is to 'Advance Australian Business in China'.

The Australian Chamber of Commerce in Hong Kong & Macau was established 23 years ago to facilitate business development and networking opportunities for its members. It represents the largest Australian business community outside Australia and is the second largest international chamber in Hong Kong. The Chamber represents more than 1,100 members and 600 companies.

Westpac Banking Corporation's Shanghai Branch opened for business on 2 January 2008. Westpac also has a Representative Office in Beijing which commenced operations in 1982 and a branch in Hong Kong. Westpac's focus is to support its Australian and New Zealand customers operating in, or looking to commence operations in China, whilst also supporting Chinese counterparties looking to transact or invest in Australia.

The Australian Trade Commission - Austrade - is the Australian Government's trade and investment development agency. Austrade has had a substantial presence in China since the 1980s and now has 14 offices across China, the largest number of points of presence of any foreign government. With 75 staff in 10 industry