“To achieve our goal of zero preventable patient deaths by 2030, it is critical to unify people and collectively improve patient safety across the globe,” said David B. Mayer, MD, CEO of Patient Safety Movement Foundation. “We are pleased to honor each of these individuals for their remarkable efforts to spread public awareness of this important issue and improve the patient experience for everyone.”

The Humanitarian Award recipients were honored across three categories this year – the Judie Burrows award, Michael Seres award and Steven Moreau award. The Judie Burrows award was established to recognize an individual who has told a story of preventable harm or death that has made a significant impact in the public sphere in the last year. The Michael Seres award was designed in honor of lifelong patient safety advocate, Michael Seres, who passed away in May 2020. This award recognizes an individual who contributed to the advancement of person and family engagement, public awareness and public engagement in patient safety. The Steven Moreau award is given to a hospital administrator who possesses a zeal for improving patient safety at their hospital. This year’s recipients included:

The Patient Safety Movement Foundation launched the Humanitarian Awards in 2013 to recognize individuals whose work helps advance patient safety. To learn more about the awards and past winners, visit: https://patientsafetymovement.org. 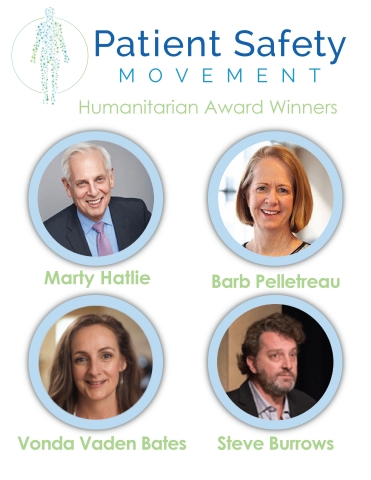