PHOENIX--(BUSINESS WIRE)--The Make-A-Wish Foundation today announced a $1.1 million donation from Blizzard Entertainment, a premier developer and publisher of entertainment software. The donation is based on 50 percent of the total sales during November and December 2009 of a special in-game pet, the Pandaren Monk, for Blizzard's award-winning, massively multiplayer online role-playing game, World of Warcraft®.

On Tuesday, Feb. 16, Blizzard made the presentation during a special ceremony at the company's headquarters in Irvine, Calif. Blizzard invited 15 wish children who are also gaming enthusiasts and their families to enjoy an exclusive learning experience with the World of Warcraft development team, including an inside look at how the game is created.

“We've had a long relationship with the Make-A-Wish Foundation, and we're proud to support the priceless work they do for children,” said Mike Morhaime, CEO and cofounder of Blizzard Entertainment. “This donation also reflects the spirit and generosity of our players – their enthusiasm for World of Warcraft and for supporting a good cause made this possible.”

“Thanks to Blizzard Entertainment and World of Warcraft players around the world, we will be able to grant the heartfelt wishes of even more courageous children with life-threatening medical conditions,” said David Williams, Make-A-Wish Foundation of America president and chief executive officer. “This generosity is helping us bring hope, strength and joy to children when they – and their families – are facing an unimaginably difficult time in their young lives.”

About the Make-A-Wish Foundation

Best known for blockbuster hits including World of Warcraft® and the Warcraft®, StarCraft®, and Diablo® series, Blizzard Entertainment, Inc. (www.blizzard.com), a division of Activision Blizzard (NASDAQ: ATVI), is a premier developer and publisher of entertainment software renowned for creating some of the industry's most critically acclaimed games. Blizzard Entertainment's track record includes eleven #1-selling games and multiple Game of the Year awards. The company's online-gaming service, Battle.net®, is one of the largest in the world, with millions of active users. 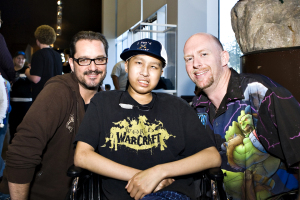 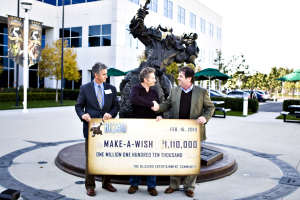