Malaysian Foundation Recognised for Refugee Support by Sharjah with USD 136,000

SHARJAH, United Arab Emirates--(BUSINESS WIRE)--For the past couple of years, the Sharjah International Award for Refugee Advocacy and Support (SIARA) has been shining a spotlight on the achievements of unsung heroes working for refugees and stateless people at a time when the world is witnessing unprecedented levels of displacement globally, with over 65 million people forced to flee their homes, including some 21.3 million refugees.

The Dignity for Children Foundation from Malaysia, has been announced the recipient of the second edition of the award whose value was further appreciated this year to USD 136,000 (AED 500,000), in recognition of their outstanding efforts in Asia and the Middle East and North Africa (MENA) region.

This year, the foundation celebrates its 20th anniversary and now provides educational services to approximately 1,100 refugees, stateless people, undocumented students and other marginalised groups in the Malaysian community of Kuala Lumpur.

The award, established by the Sharjah-based global humanitarian charity, The Big Heart Foundation (TBHF) has garnered huge praise and support from humanitarian organisations and the international community, including the likes of the United Nations High Commissioner for Refugees (UNHCR), who have said that it offers a valuable platform to showcase solidarity with displaced people.

As the third largest emirate of the United Arab Emirates (UAE), and one of the cultural and humanitarian centres of the Arab region, Sharjah, under the vision of its leadership represented by His Highness Sheikh Dr. Sultan bin Muhammad Al Qasimi, Ruler of Sharjah, UAE, and Her Highness Sheikha Jawaher bint Mohammed Al Qasimi, wife of His Highness the Ruler of Sharjah, Chairperson of TBHF and UNHCR Eminent Advocate for Refugee Children, continues to champion philanthropic efforts by individuals and organisations around the world.

At a time when the region hosts 39 percent of forcibly displaced people, including 5 million Syrian refugees, initiatives that celebrate community spirit and humanitarian efforts are of essence.

Further information about TBHF can be found on the foundation’s website: http://tbhf.ae. 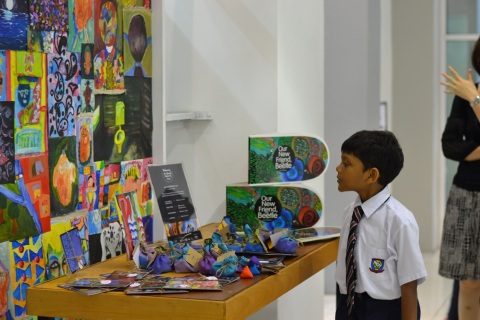 A picture from the activities Dignity Foundation organizes for refugee children (Photo: The Big Heart Foundation)