In 1984, Kyocera was the first company in Japan to start manufacturing and selling kitchen knives with blades made of fine ceramics, also known as advanced ceramics. Since then, Kyocera has been continually enhancing the material technology and design of its knives, developing its product lineup with various colors and styles, and expanding its sales network, converting more and more customers around the world into fans of ceramic knives. Of late, popularity of Kyocera’s knives has been rapidly growing, with annual shipments exceeding one million units in the past few years, and accumulated shipments since 1984 surpassing the 10 million unit mark.

Since its foundation in 1959, Kyocera has built a strong base in advanced ceramic materials and processing technology in the semiconductor, electronics, and medical industries. This wealth of experience has lead to the production of high-quality ceramic knives with high levels of strength and sharpness. As a pioneer in the field of ceramic knives, the company has garnered a reputation for product reliability and is currently the leading ceramic knife supplier to premiere cutlery retailers worldwide.

Making ceramic knives a staple in kitchens around the world

Since sales began in Japan in 1984, Kyocera’s ceramic knives have become favored kitchen tools in many households due to the beneficial features which include: extremely sharp blades that hold their edge for a very long time and do not rust, the ergonomic and lightweight feel of the knives and being able to easily clean due to the non-porous quality of advanced ceramic. Furthermore, over the years Kyocera has been able to enhance its manufacturing technology and scale, allowing the knives to be sold at a more accessible price.

In 2005, Kyocera expanded sales outside of its domestic Japanese market, and now they are available around the world, with over 9,000 stores carrying its ceramic knives.

In 2006, Kyocera launched its Color Series ceramic knives. With the same high quality and functionality, this series also offered a new rich variety of fashionable handle colors for the kitchen. The Color Series has been especially popular with consumers, allowing them to add their own personal style and flare to their kitchen motifs.

Kyocera supports breast cancer research to promote early detection and diagnosis of breast cancer, and donates part of the profits from its pink ceramic kitchen products to the movement. In the U.S., Kyocera has donated profits from its Pink Kitchen Series since 2004. Kyocera supports similar activities in Australia, France, Philippines, Korea, Malaysia, Japan, Thailand, Singapore, Italy and China. 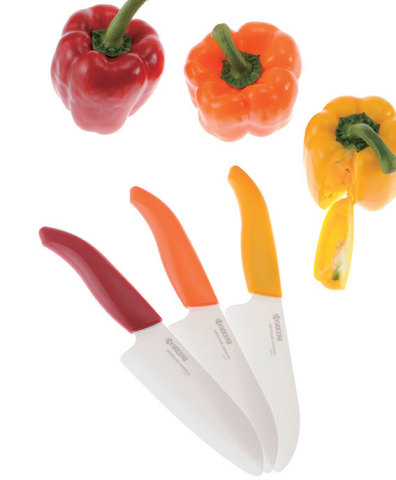