To tweet this news, copy and paste http://bit.ly/XpD0GZ to your Twitter handle with the hashtag #MasterCard and #MWCashless

The study looked at social commentary over a six-month period and analyzed consumer conversations around mobile payments to assess people’s willingness to adopt mobile payment services.

The analysis across 43 markets and in 26 languages shows:

MasterCard today introduced MasterPass - the future of digital payments. MasterPass is a digital service that allows consumers to use any payment card or enabled device to discover enhanced shopping experiences that are as simple as a click, tap or touch – online, in-store or anywhere.

MasterPass is the evolution of PayPass Wallet Services which was announced in Spring of 2012 and has been in production trial with select merchants and issuers. Consumers around the world will now be able to sign up for the service through their preferred banks in Australia and Canada by the end of March, and in the United Sates and the United Kingdom later in the Spring and Summer respectively. Additionally, MasterPass availability in 2013 will expand to other markets worldwide, including: Belgium, Brazil, China, France, Italy, Netherlands, Singapore, Spain and Sweden.

PRIME Research conducted the Mobile Payments study across 43 markets in North and South America, Europe, Africa, Asia and the Pacific Rim. Using PRIME’s proprietary social media analytics methods and technology, the research firm identified 85,000 relevant social media posts over the past six months on the subject of mobile payment innovation in the context of MasterCard and its industry peers; sentiment analysis shows the majority of posts were driven by news-story sharing (94% positive/factual, only 6% negative tone overall which is a reflection of the original content as it appeared in traditional news outlets). Within the 85,000 comments, 10,000 more substantive comments were subjected to PRIME Research’s more granular expert human-content analysis of which a condensed subset of 450 comments offered the deepest insight.

Find a complete list of MasterCard’s news announcements from Mobile World Congress in our Digital Press Kit and follow us @MasterCardNews #MWCashless #MAMobileSymp to join the conversation.

PRIME Research, www.prime-research.com, provides research-based corporate and brand reputation counseling based on trends uncovered through social and traditional media content analysis. The firm, with offices around the world, marries the speed and consistency of technology with the insights and local cultural sensitivity derived from its international staff of 600 analysts and consultants.

MasterCard (NYSE: MA), www.mastercard.com, is a technology company in the global payments industry. We operate the world’s fastest payments processing network, connecting consumers, financial institutions, merchants, governments and businesses in more than 210 countries and territories. MasterCard’s products and solutions make everyday commerce activities – such as shopping, traveling, running a business and managing finances – easier, more secure and more efficient for everyone. Follow us on Twitter @MasterCardNews, join the discussion on the Cashless Conversations Blog and subscribe for the latest news. 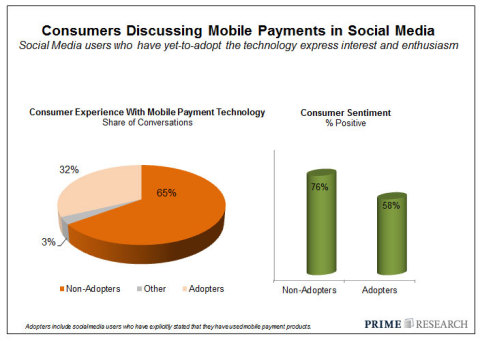 The MasterCard Conversation Suite, powered by Prime Research, listened in on 85,000 social media conversations to determine how consumers really feel about the shift to mobile payments. (Graphic: Business Wire)