SHERMAN OAKS, Calif.--(BUSINESS WIRE)--Cherokee Inc. (NASDAQ: CHKE), a global marketer of style-focused lifestyle brands, announced today that through its partnership with RT Mart, one of the leading and fastest growing retailers in China, that it has launched an online Cherokee store on China’s largest e-commerce website, Tmall.com. Cherokee will join the ranks of Gap, UNIQLO, Adidas, Levi’s and many other leading brands who have all opened retail storefronts on Tmall.com.

Cherokee’s affordable fashion lifestyle products were first introduced in China by RT Mart in April 2010 and are currently featured in 221 RT Mart stores throughout the country. RT Mart now joins other leading retailers leveraging the fast growing e-commerce movement in China by offering Cherokee men’s, women’s, and children’s apparel online at http://cherokee.tmall.com. Additional categories may be added to the online flagship storefront in the future.

Cherokee lifestyle-branded products are sold in over 40 countries worldwide with global retail sales approaching $2 billion. This success has in large part been driven by retail partners, like RT Mart, that focus on the regional requirements and needs of their consumers. Cherokee and RT Mart have identified that in order to address the ever-changing and developing Chinese consumer’s needs it is essential that they offer an e-commerce solution that provides affordable, high-quality products to consumers of all ages.

“The expansion with Tmall.com is another exciting step in the evolution towards establishing the Cherokee brand amongst Chinese consumers,” said Henry Stupp, Chief Executive Officer of Cherokee. “RT Mart is an exceptional brick-and-mortar retail partner and Tmall is a clear leader in China’s internet retail space. Their combined efforts, along with Cherokee’s top-quality, affordable lifestyle products, will enable us to interact directly with Chinese consumers as well as quickly respond to our Chinese consumers’ needs while simultaneously positioning the Cherokee brand for long-term growth.”

RT Mart President, Peter Huang, furthered Mr. Stupp’s sentiments. “The launch of the Cherokee online flagship store on Tmall.com is a very important milestone for both RT Mart and Cherokee. Since its launch in our stores in 2010, the Cherokee brand has been a great success, providing the Chinese consumer with truly differentiated, casual, comfortable products that stand apart from clothing lines sold in other hypermarkets. Now with an online Cherokee flagship store we will be able to expand our customer base as well as continue to enhance and grow the Cherokee brand in China.”

Sun Art Retail Group Limited is the largest and fastest growing hypermarket operator in China in terms of sales in 2011 and market share increases from 2008 to 2011, respectively. Currently, the Company operates hypermarket business under two well-recognized banners “Auchan” and “RT-Mart.”

China's leading B2C shopping destination for quality, brand-name goods launched by Taobao in April 2008, Tmall.com (www.tmall.com) is an online shopping landmark in China with an extensive brand selection. An open business-to-consumer (B2C) platform, Tmall.com has established itself as the destination for quality, brand-name goods catering to increasingly sophisticated Chinese consumers and is the most visited B2C online retail website in China. In June 2011, it was separated from Taobao’s consumer-to-consumer (C2C) marketplace and became an independent platform.

Tmall.com and Taobao Marketplace set a record for highest single-day transaction volume during a special promotion on November 11, 2012, facilitating the sales of goods totaling RMB19.1 billion (US$3.1 billion) on the day. In 2012, the combined gross merchandise volume (GMV) of the two platforms exceeded RMB1 trillion (US$ 158 billion). Tmall.com is a business within Alibaba Group. 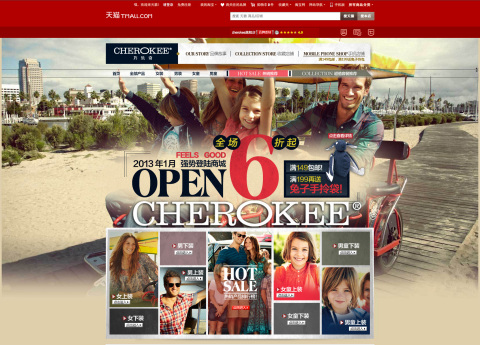