ATLANTA--(BUSINESS WIRE)--There’s something special in the air this holiday season thanks to Coca-Cola and three emerging music artists tapped to produce the brand’s 2012 holiday anthem.

The eclectic trio brings varying musical backgrounds and life experiences to the song, which celebrates the magic of the season. Mae’s soulful jazz and R&B influences blend with contemporary pop on the track to produce a truly unique sound. The song caps off a whirlwind year for Jono that saw him go from working two jobs to recording the Coca-Cola holiday anthem and his own solo EP.

“The story behind the song is reminiscent of a personal memory I had of bringing a group of friends that had moved all across the country, together again for the holidays,” said Grayson Sanders. “It’s a cultural theme that is relevant to anyone during this special time of the year.”

Coca-Cola has a long-standing tradition of creating memorable holiday music. On the heels of “Shake up Christmas” featured in the 2010 and 2011 holiday campaigns, “Something in the Air” is the latest track to feature the brand’s musical signature – the famous 5-note melody.

Available now on iTunes, “Something in the Air” is the cornerstone of this year’s Coca-Cola holiday campaign. With campaign elements launching in nearly 100 countries worldwide, the song will serve as the soundtrack to the 2012 Coca-Cola holiday TV ad airing in various countries around the world beginning this month. The campaign expands upon the traditional meaning of togetherness at the holidays to demonstrate that when people come together collectively during the holidays, it makes for a happier world where magical things can happen.

As part of its holiday efforts, Coca-Cola is enabling consumers in various countries to personalize “Something in the Air.” Through an online application, consumers can download the song and make it their own by adding their own voice. They can even customize an album cover with pictures from their Facebook profile and share it with family and friends.

“Music is such a big part of my own holiday tradition,” said singer Lauriana Mae. “I’m excited to be part of this year’s Coca-Cola holiday campaign. Allowing people to share the song in such a unique and personalized way is great and I’m looking forward to seeing what the fans do with it.”

The holiday music series, “A Very Special Christmas®” was started in 1987 and has been the single most successful benefit recording series in musical history. Over the years the series has brought together some of the biggest names in the recording industry, and has generated more than $109 million in royalties and investments for Special Olympics.

Founded by Eunice Kennedy Shriver in 1968, Special Olympics works to empower people with intellectual disabilities through the power of sport. Coca-Cola has been a sponsor of Special Olympics since its inception.

The “A Very Special Christmas®” 25th Anniversary album is available for download now on iTunes, and marks the first time a song from Coca-Cola has been featured as part of the series.

“Coca-Cola is once again part of the magic of the season,” said Shay Drohan, SVP, Sparkling Brands, The Coca-Cola Company. “This year we’re especially honored to take part in a holiday music tradition benefitting Special Olympics, an organization that does so much for the inclusion and empowerment of those with intellectual disabilities through sport.”

The Coca-Cola Company (NYSE: KO) is the world's largest beverage company, refreshing consumers with more than 500 sparkling and still brands. Led by Coca-Cola, the world's most valuable brand, our Company's portfolio features 15 billion-dollar brands including Diet Coke, Fanta, Sprite, Coca-Cola Zero, vitaminwater, Powerade, Minute Maid, Simply, Georgia and Del Valle. Globally, we are the No. 1 provider of sparkling beverages, ready-to-drink coffees, and juices and juice drinks. Through the world's largest beverage distribution system, consumers in more than 200 countries enjoy our beverages at a rate of 1.8 billion servings a day. With an enduring commitment to building sustainable communities, our Company is focused on initiatives that reduce our environmental footprint, support active, healthy living, create a safe, inclusive work environment for our associates, and enhance the economic development of the communities where we operate. Together with our bottling partners, we rank among the world's top 10 private employers with more than 700,000 system associates. For more information, visit Coca-Cola Journey at www.coca-colacompany.com, follow us on Twitter at twitter.com/CocaColaCo or check out our blog, Coca-Cola Unbottled, at www.coca-colablog.com.

Brooklyn-based composer and performer, Grayson Sanders is the vocalist for the band Snowmine. At age 11 he won the Connecticut Young Composer's Competition, and premiered with the Hartford Symphony. He attended NYU & won the University's highest honors in classical composition. He has written 4 large symphonic works all premiered by New York area orchestras. He has scored 15 short films including a feature for network television. He did classically inspired arrangements performed on Wyclef Jean's 2008 World Tour and currently works as a freelance composer for multiple New York post-production companies.

Recently signed to Atlantic Records, Lauriana Mae melds soulful jazz vocals with contemporary pop, R&B and hip hop music. Mae released her debut EP entitled "Love Mae” in December 2011. She is planning her debut album for 2013, gearing up to break the mold of popular music, reinventing the essence of great soul music from the past and present and bringing it to fans in a way that is distinctly Mae. For more information on Lauriana Mae, follow her on Twitter @laurianamae, Facebook.com/laurianamaemusic or visit her website http://www.laurianamaemusic.com/

Jono was born in Denver, Colorado and fell in love with music in high school. In July 2012, he opened for Jason Mraz in Honolulu and in the summer of 2012 was featured on Nigel Lythgoe’s “Opening Act” on E! Television. Jono is a signed songwriter with Mulinjer LLC and is in the studio working on his first solo EP and finishing up his album with Therapoetic Soul. For more information on Jono visit his website http://www.mulinjer.com/Jono.html.

Visuals and footage to support the campaign can be downloaded at
http://www.coca-colacompany.com/media-center 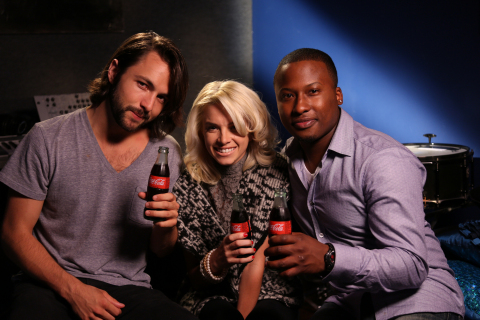 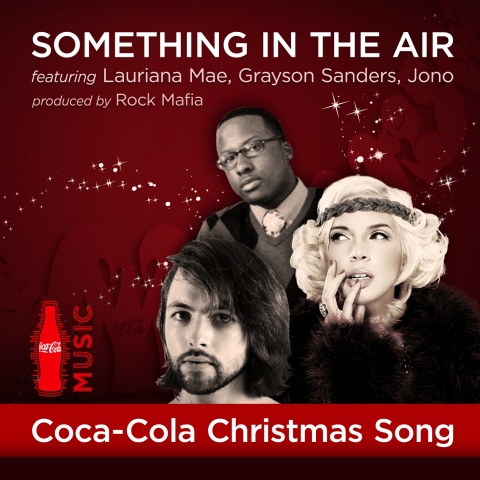