Commenting on the special Jack Daniel’s offering honoring his father, Frank Sinatra, Jr. said that “Dad would be very flattered by the association.

“This fine Tennessee Whiskey, or Old No. 7 as he referred to it, was a favorite part of my father’s life and he loved both sharing it with his friends and introducing it to new acquaintances. I’m very pleased to continue to be a part of the Jack Daniel’s family and feel the introduction of Sinatra Select is an appropriate tribute as we near my father’s 100th birthday in 2015,” said Sinatra, Jr.

According to Jim Perry, managing director for Brown-Forman Travel Retail the parent brand of Jack Daniel’s, the idea for a Jack Daniel’s premium whiskey to salute “Ol’ Blue Eyes” has been suggested for many years.

“It was common knowledge both within the entertainment industry and in the world of Jack Daniel’s that Frank was one of Jack’s biggest and most loyal fans. He often referred to his favorite whiskey as the ‘Nectar of the Gods.’ In discussing this special edition Jack Daniel’s, the Sinatra family responded with a great deal of enthusiasm. All Frank’s children were vocal and encouraging in their endorsement. We feel that Jack Daniel’s Sinatra Select will quickly become a cherished item for your home bar and encourage folks to enjoy this superb whiskey,” Perry added.

On stages throughout the world from 1950s thru the 1990s, Sinatra would always offer a toast to his audience with a glass of Jack Daniel’s in his hand.

Hand selected by the Master Distiller Jeff Arnett, “Sinatra barrels” used to make the product were crafted to provide an extra full character and darker rich amber color by exposing the spirit to extra layers of toasted wood on the inner surface of the barrels. The extra rich barrels were mingled with classic Old No. 7 Tennessee Whiskey and bottled at 90 proof resulting in a character that is full of oak and spice notes with an exceedingly smooth vanilla finish. The smooth, bold character of the whiskey is meant to embody the smooth, bold character of the man.

In addition to Travel Retail, Jack Daniel’s Sinatra Select will be available at the Jack Daniel’s Distillery in Lynchburg, Tennessee in 2013.

Jack Daniel’s Sinatra Select was introduced on October 23, 2012 at the Tax Free World Association meeting in Cannes, France. The news conference was attended by Frank Sinatra, Jr., who later performed at the launch event for the product honoring his father.

Frank Sinatra Enterprises (FSE) is a joint venture between the Sinatra family and Warner Music Group. FSE owns Sinatra recordings from the Reprise era as well as a treasure trove of films, television specials and unreleased footage, photos and audio recordings, which collectively represent one of the foremost bodies of artistic work of the modern era. FSE also owns and manages Sinatra’s name and likeness rights and represents the artist’s rights to Columbia and Capitol catalogues. FSE evaluates innovative new products and venture opportunities with respect to the legendary entertainer’s name and likeness, as well as Sinatra’s audio and visual recordings. (www.sinatra.com) 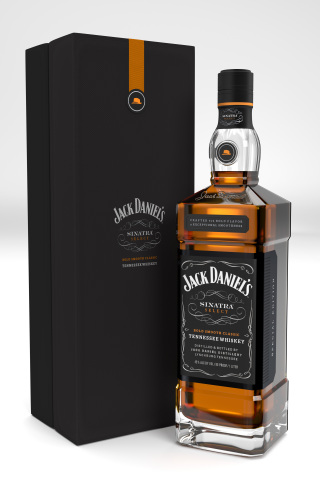