Pantene Athletes Prove that “Healthy is the New Beautiful”

LONDON--(BUSINESS WIRE)--In honor of the London 2012 Olympic Games being the first in modern history where women competed in as many sports as men, Pantene, the world’s leading hair care brand and a leading P&G brand, today celebrated the success of its 11 athlete beauty ambassadors, 10 of whom competed in London, for their 12 medals and embodiment of Pantene motto “Healthy is the New Beautiful.”

From Saudi Arabia sending female athletes to the Olympic Games for the first time in the country’s history to the first time that U.S. female athletes outnumbered male, female athletes dominated the conversation during the 17-day competition. Pantene proudly sponsored 10 of these elite London competitors as beauty ambassadors, including the U.S.’s Natalie Coughlin, Argentina’s Gisela Dulko and Great Britain’s Victoria Pendleton.

“The London 2012 Olympic Games were a milestone for women in sports: every country’s delegation included at least one female athlete and every sport included both male and female competitions,” explained Kathryn Olson, CEO of the U.S.-based Women’s Sports Foundation which focuses on advancing the lives of girls and women through sports and physical activity. “Pantene’s prominent support for women’s sports throughout the competition has greatly helped raise visibility for the strength, talent, and beauty female athletes possess. Pantene and its beauty ambassadors are also helping to raise awareness for the relationship between sports and health, revealing the beauty of strong female athletes in a context that’s encouraging to young girls who need good role models in sports and in life.”

In London, the Pantene beauty ambassadors won more than 12 medals in six sports, including four gold. Russia’s rhythmic gymnast Evgeniya Kanaeva shined before the world with a gold medal. China’s diver Wu Minxia mounted the podium winning a gold medal. Great Britain’s cyclist Victoria Pendleton topped the competition at her final Olympic Games with one gold and one silver medal. The group proved the message that “healthy is the new beautiful” and were also featured in Pantene’s first truly global marketing campaign to support the Olympic Games, which featured new packaging and a fully integrated marketing campaign which lived across multiple channels.

“As this is my last Olympic Games, I am so proud to have been a part of this landmark year for female athletes,” said Pantene athlete and London 2012 gold and silver medal winner Victoria Pendleton. “I am passionate about inspiring young women and as a part of Pantene’s beauty campaign I am able to share the message that healthy is the new beautiful. Hopefully our performances will serve as inspiration for future generations of female athletes, and I am thankful that Pantene was there to support me.”

“We truly believe that healthy is the new beautiful and this was showcased through our engagement with athletes and consumers around the world during London 2012,” said Hanneke Faber, Vice President and Brand Franchise Leader, Global Haircare at P&G. “We have seen tremendous continued support of this concept since its launch earlier this year. Our Olympians were able to see firsthand how Pantene’s performance allowed them to concentrate on their athletic performance and how the product stands up to the rigors of competing in The Olympics. We provided these women and the more than 10,000 London athletes and their families with healthy, beautiful hair through our salons at the P&G Family Home and in the Athlete Village. We are so proud of our Pantene athlete ambassadors, whose gold medal count of four placed them in the same company of the top 20 countries that participated in the Olympic Games.”

With the London 2012 Olympic Games being considered the first truly “social games,” Pantene’s online engagement resulted in connections to more than 1.5 million people over the last month to showcase the brand’s “Healthy is the New Beautiful” message.

The Pantene campaign leading up to and during London 2012 was part of P&G’s Worldwide Olympic Partner status, which was anchored by the ‘Thank You, Mom’ campaign for the London 2012 Olympic Games. P&G’s “Thank you, Mom” campaign helped improve life for moms around the world and provided support for the moms of the Pantene athletes and the moms of thousands of other Olympians. Looking forward to the Sochi 2014 Olympic Winter Games, the brand will continue its support of athletes. For more information on the brand’s activities, visit www.pantene.com or www.magicbulletmedia.com/MNR/pantenebeautyambassadors. 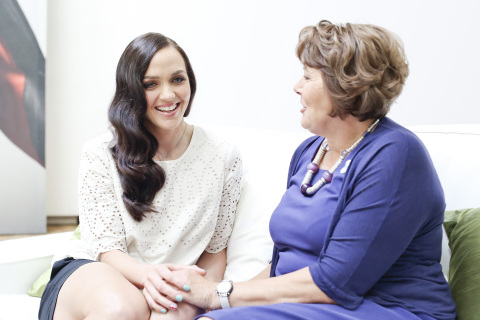