LONDON--(BUSINESS WIRE)--As the clock ticks down to the Opening Ceremony of the London 2012 Olympic Games, Coca-Cola is ramping up for the brand’s largest-ever Olympic Games activation. Never before in the Company’s 84-year Olympic partnership has the brand gone for marketing gold in a campaign that has teens at its core. The Move to the Beat™ campaign which is rolling out around the world in more than 100 countries includes:

“As a proud sponsor of the Olympic Games, Coca-Cola is excited that London 2012 has finally arrived,” said Joe Tripodi, Chief Marketing and Commercial Officer, The Coca-Cola Company. “The Move to the Beat™ campaign has inspired teens all around the world, through their passion for music and sport, to get engaged in the London 2012 Olympic Games. Now that the Games are upon us, we’re delighted to be able to bring our campaign fully to life and show teens around the world how the host city moves to the beat during Games time.”

The Coca-Cola Company (NYSE: KO) is the world's largest beverage company, refreshing consumers with more than 500 sparkling and still brands. Led by Coca-Cola, the world's most valuable brand, our Company's portfolio features 15 billion-dollar brands including Diet Coke, Fanta, Sprite, Coca-Cola Zero, vitaminwater, Powerade, Minute Maid, Simply, Georgia and Del Valle. Globally, we are the No. 1 provider of sparkling beverages, ready-to-drink coffees, and juices and juice drinks. Through the world's largest beverage distribution system, consumers in more than 200 countries enjoy our beverages at a rate of 1.8 billion servings a day. With an enduring commitment to building sustainable communities, our Company is focused on initiatives that reduce our environmental footprint, support active, healthy living, create a safe, inclusive work environment for our associates, and enhance the economic development of the communities where we operate. Together with our bottling partners, we rank among the world's top 10 private employers with more than 700,000 system employees. For more information, please www.thecoca-colacompany.com or follow us on Twitter at twitter.com/CocaColaCo. 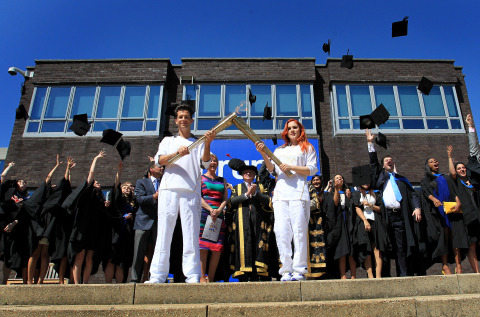 Singer Katy B passes the Olympic flame to musician Mark Ronson at Brunel University. Both music stars were nominated to carry the flame after they created Anywhere in the World, the musical anthem for the Coca-Cola Company's Move to the Beat Olympic Games campaign. (Photo: Business Wire)