DEARBORN, Mich.--(BUSINESS WIRE)--EnvisionTEC, a leading global manufacturer of desktop and full-production 3D printers and materials, today revealed a hardware update to its family of large-frame 3D printers that allows them to deliver best-in-class resolution.EnvisionTEC will now offer XY resolution of 25 microns ― equivalent to about half the cross-section of a human hair — in two of its largest 3D printers:

The improved performance is made possible with a new FPGA (field-programmable gate array) control that allows EnvisionTEC to turn its laser on and off in the Y scanning direction with lightning-fast speed.

“With this hardware upgrade, EnvisionTEC can now offer the same level of resolution in our 3SP family that we are known for with our Perfactory printer family,” said CEO Al Siblani.

A demonstration board 3D printed on a Vector UHD 3SP will be on display this week in Fort Worth, Texas, at Rapid + TCT, the premier event for 3D manufacturing in North America. EnvisionTEC will also be showcasing other new 3D printer and material innovations in Booth 1304.

While conventional SLA systems use an expensive solid state laser to draw out parts layer by layer, often reflecting the beam off galvo mirrors in a large build area, the 3SP approach is simple and efficient.

A multi cavity diode laser is reflected off a spinning mirrored drum that can efficiently scan across a very large vat to cure material. Essentially, the laser draws in straight lines in the Y direction, with the beam simply turning on or off to cure the necessary shape as the complete laser assembly moves in the X direction.

A white paper detailing how 3SP is superior to SLA for manufacturing and production can be found at EnvisionTEC.com/learn3SP.

Adoption of 3SP continues to grow as knowledge about the technology and portfolio of materials expands. The 3SP line is popular among dental laboratories printing large volumes of dental models, but users also include manufacturers in a variety of industries, including medical devices, automotive, aerospace, consumer goods and more. 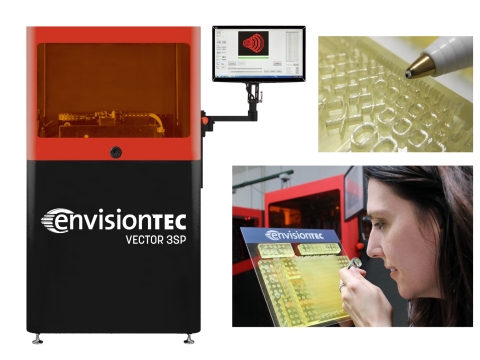 At RAPID + TCT, the premier event for 3D printing in North America, EnvisionTEC will be showcasing the potential of its 3SP family of 3D printers. A new hardware upgrade allows the large frame models to deliver XY resolution of 25 microns, a precision level equivalent to about half the cross-section of a human hair. (Photo: Business Wire)