Shanghai, China – November 5, 2020 -- Beyond Meat, Inc. (NASDAQ: BYND) today announced its participation in a historic signing ceremony with the Zhejiang Government at the China International Import Expo (CIIE), commemorating its previously announced  plan to build two plant-based meat production facilities in the Jiaxing Economic & Technological Development Zone (JXEDZ) in Zhejiang. The first facility is expected to be completed by the end of 2020, and the company is planning to start building the second facility in 2021. The addition of these facilities demonstrates and solidifies Beyond Meat's commitment to the Chinese market and exemplifies the company’s confidence in developing and contributing to the growing plant-based meat market in China.

Beyond Meat was the only food company that participated in the Zhejiang signing ceremony and will be the first multinational company focused solely on plant-based meat production to bring its own major production facility into China. Beyond Meat and the Zhejiang government see great potential from the partnership, and Beyond Meat's place of honor at the ceremony solidifies its strategic importance to Zhejiang.

Candy Chan, General Manager China, Beyond Meat: "It is an honor and a privilege for Beyond Meat to be invited to the China International Import Expo to be part of the signing ceremony for the development of these two plant-based meat production facilities. The historic partnership with the JEXEDZ will allow Beyond Meat to grow its manufacturing and R&D footprint in China and bring a greater range of products to Chinese consumers. The CIIE is a fantastic opportunity for Beyond Meat to showcase its full dedication to China and the Chinese people."

Since its market entry in April, Beyond Meat has expanded throughout China, making announcements with some of the biggest names in the food & beverage industries including Starbucks and KFC. Beyond Meat also launched its Beyond Burger in major retail outlets including Metro and Freshippo (Hema Xiansheng stores), allowing consumers to experience the cooking versatility and ease of integrating plant-based protein into daily diets and beloved recipes.

Last month, Beyond Meat launched its first ever brand campaign in China - ‘One Million Ways to Live Healthier’ - embarking on a mission to drive awareness of the nutritional and environmental benefits of plant-based meat. The company invited consumers to see how, over time, small changes such as what you put at the center of your plate can have a meaningful collective impact on health living and the health of our planet. To  reach China's punk-health tribes and drive consumer trial, Beyond Meat is teaming up with like-minded, innovative brands, events and experiences like DOE streetwear and Innersect youth convention, to introduce its nutritious plant-based meat products to Chinese consumers through sampling, pop-up activations and more.

Beyond Meat is on a mission to build meat from plants that’s virtually indistinguishable from its animal protein equivalent. This innovation enables consumers to experience the taste, texture and other sensory attributes that are similar to popular animal-based meat products while enjoying the nutritional and environmental benefits of plant-based meat.

Beyond Meat, Inc. (NASDAQ: BYND) is a global protein company, offering a portfolio of revolutionary plant-based meats. Founded in 2009, Beyond Meat products are made from simple, plant-based ingredients and designed to have the same taste and texture as animal-based meat, while being better for people and the planet. Beyond Meat’s brand commitment, Eat What You Love™, represents a strong belief that there is a better way to feed our future and that the positive choices we all make, no matter how small, can have a great impact on our personal health and the health of our planet. By shifting from animal-based meat to plant-based meat, we can positively impact four growing global issues: human health, climate change, constraints on natural resources and animal welfare. As of June 27, 2020, Beyond Meat had products available at approximately 112,000 retail and foodservice outlets in 85 countries worldwide. Visit beyondmeatchina.com.cn, follow @别样肉客BeyondMeat on Sina Weibo, and scan the QR code below to follow us on WeChat. 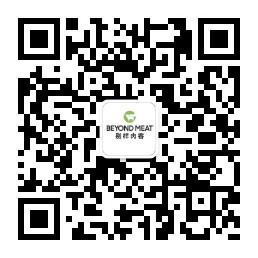