Strategic Capital: To Resolve JSF’s ESG Issue Caused by the BOJ, MOF and the TSE, We Have Requested an Extraordinary General Meeting of Shareholders

TOKYO--(BUSINESS WIRE)--Strategic Capital, Inc. (SC) is the manager of a fund that holds approximately 5.0% of Japan Securities Finance (JSF).

Since listing on the Tokyo Stocks Exchange (TSE), the Bank of Japan (BOJ), the Ministry of Finance (MOF) and the TSE have long been using JSF’s director and officer positions as an amakudari1 destination. Therefore, we have decided to convene an extraordinary general meeting of shareholders (EGM) because we believe the amakudari is damaging the shareholder value of JSF from the viewpoint of S (Society) and G (Governance) of ESG.

We hope that all of JSF’s shareholders will support our shareholder proposal from the perspective of S and G.

Please see our special website (here) for more details on the harm caused by amakudari, the breakdown of governance and the proposal.


Issues with amakudari
S: A violation of social justice

amakudari from the MOF

amakudari from the TSE

Voted against the proposal to disclose the President’s remuneration

At the last AGM, SC submitted a formal shareholder proposal to “disclose the individual remuneration of the President”, pointing out that all JSF presidents were from the BOJ. ISS recommended supporting the proposal. SFP, however, opposed the proposal.

Should amakudari be supported?

It is clear JSF is an amakudari destination for an organization that plays a central role in the Japanese economy. It is not easy to get a return on one’s investment nor do we think it is the intention of investors to tolerate amakudari which is against social justice.

It is essential for JSF to put an end to the harmful practice of amakudari and to increase shareholder value through appropriate personnel and good management. We would like you the investors to encourage SFP to exercise its voting rights in an appropriate manner.

1 amakudari – (literally "descent from heaven") is a metaphor for the institutionalized practice where Japanese senior bureaucrats retired to high-profile positions in the private and public sectors. 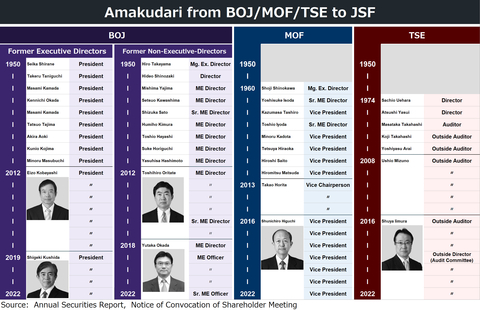