teamLab Botanical Garden Osaka, the Collective’s Latest Outdoor Museum, is an Ever-Changing World of Art Created by the Natural Environment and Seasonal Flora

Stretching over an area of 240,000-sqm with a large lake at its center, Nagai Botanical Garden is home to numerous wild bird species and seasonal flora. The artworks emerge and are shaped by the garden’s plants, trees, and the birds that inhabit the area, as teamLab incorporates these natural elements through the use of non-material digital technologies - sensing, networks, light, and sound. The works transform interactively, influenced by the wind, rain, as well as by the presence of visitors.

teamLab Botanical Garden has unveiled several new works by teamLab including Sculptures of Dissipative Birds in the Wind, a giant installation that depicts the movement, or energy dissipated, by the surrounding wind and flying birds in real time, which in turn creates an artwork that perpetually changes in real time.

The exhibition, which changes in scenery with the seasons, also features works that incorporate the seasonal flora. For the month of November, a seasonal exhibit that uses living cosmos flowers, Life is Flickering Light Floating in the Dark - Cosmos, is on view. Across a 2,000-sqm expansive field, the cosmos emerge from the dark as they shine. When people stand still close to the cosmos, they shine brightly and produce a tone. The light then radiates out, spreading to nearby cosmos as they resonate with the same tone.

The artworks transform interactively, influenced by wind, rain, and as well as by the behavior of the people in it, making the environment and the people a part of the works. The people and the artworks, the trees, the forest and the lake, the ecosystem and the environment, all form a continuity without boundaries.

teamLab aims to explore a space where human perception expands from the artwork itself to the environment,” says teamLab.

teamLab (f. 2001) is an international art collective. Their collaborative practice seeks to navigate the confluence of art, science, technology, and the natural world. Through art, the interdisciplinary group of specialists, including artists, programmers, engineers, CG animators, mathematicians, and architects, aims to explore the relationship between the self and the world, and new forms of perception.

teamLab exhibitions have been held worldwide, including in New York, London, Paris, Singapore, Silicon Valley, Beijing, and Melbourne among others. teamLab signature museums include teamLab Borderless and teamLab Planets in Tokyo, teamLab Borderless Shanghai, and teamLab SuperNature Macao, with more to open in cities including Abu Dhabi, Beijing, Hamburg, Jeddah, and Utrecht. teamLab.art 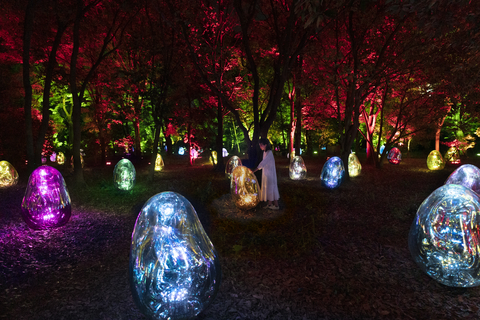 When an ovoid is pushed by a person, blown by the wind, or hit by rain, it shines brightly and produces a tone as it rises back up on its own. The surrounding ovoids also respond one after another, resonating and emitting the same tone and light color. (teamLab, Resonating Microcosms in the Common Camellia Garden / Photo: teamLab) 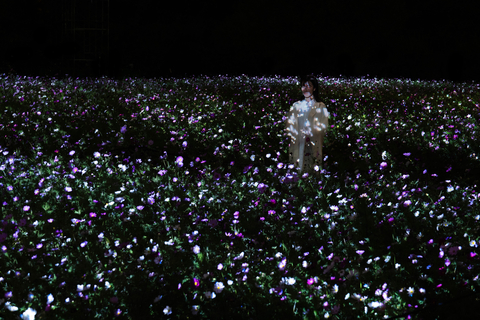 The cosmos shine brightly in the dark, and when people stand still close to them, they shine more brightly and produce a tone. The light of that cosmos then radiates out, spreading to nearby cosmos as they resonate with the same tone. (teamLab, Life is Flickering Light Floating in the Dark - Cosmos / Photo: teamLab)