Zynga Opens Pre-Registration for FarmVille 3 Ahead of November 4, 2021 Launch

Reveal trailer reveals rich and expansive content designed to captivate the imagination of FarmVille players around the world
More than 150 breeds of animals to collect, breed and nurture, and a diverse cast of farmhands to help you build and personalize your own unique farm
Announces FarmVille 3 will be available to download on iOS and Android mobile devices, as well as on MacOS on November 4, 2021

SAN FRANCISCO--(BUSINESS WIRE)--Zynga Inc. (Nasdaq: ZNGA), a global leader in interactive entertainment and creator of the popular FarmVille franchise, today announced that it has opened pre-registration for its upcoming title, FarmVille 3. The agriculture-simulation social game will be available at launch on November 4, 2021 on iOS and Android devices worldwide, as well as on M1-equipped Apple laptop and desktop devices. Zynga also released the game’s reveal trailer introducing fan-favorite farmhand Marie, brand new characters and adorable animals, all waiting for players in FarmVille 3.

“Twelve years ago, FarmVille burst onto the gaming scene, creating a loyal following that has drawn over 700 million installs for the FarmVille series worldwide,” said Bernard Kim, President of Publishing at Zynga. “Today, we are thrilled to open pre-registration for FarmVille 3. The game has been uniquely designed to captivate the imagination of the many players who have enjoyed FarmVille over the past decade, as well as the enthusiasm of a new generation of gamers.”

FarmVille 3 will feature over 150 breeds of animals ranging from chickens and cows to exotic new pets such as friendly tigers and fluffy alpacas. Players can adopt, nurture and raise baby animals including lovable chicks, lambs, piglets and many more adorable creatures. For their parenting efforts, players will be rewarded with unique farm items to help them along their journey.

Returning to the franchise is fan-favorite character Marie, who will guide and greet both the FarmVille community and new players looking to set up land for the very first time. Marie will be accompanied by a cast of more than 30 diverse farmhands. Each character will be equipped with handy skills such as baking, fishing, lumberjacking and crafting to help players on their farm-building journey.

The weather is a game changer, too! Come rain or shine, players will be able to check the in-game weather forecast and use it to their advantage to boost the yield of their next harvest or fishing trip.

Players can pre-register now to stay up to date with the latest news on FarmVille 3 and be among the first to be alerted when the game launches on November 4, 2021. In the first two weeks after the full worldwide launch, players who download the game will receive a special starter kit that contains interactive welcome features, such as decorative elements and the ‘Early Bird profile picture’, designed to help players personalize their in-game country homestead.

Players can pre-register to receive more information by visiting www.FarmVille3.com.

Zynga is a global leader in interactive entertainment with a mission to connect the world through games. With massive global reach in more than 175 countries and regions, Zynga has a diverse portfolio of popular game franchises that have been downloaded more than four billion times on mobile including CSR Racing™, Empires & Puzzles™, Hair Challenge™, Harry Potter: Puzzles & Spells™, High Heels!™, Merge Dragons!™, Merge Magic!™, Queen Bee™, Toon Blast™, Toy Blast™, Words With Friends™ and Zynga Poker™. With Chartboost, a leading mobile advertising and monetization platform, Zynga is an industry-leading next-generation platform with the ability to optimize programmatic advertising and yields at scale. Founded in 2007, Zynga is headquartered in California with locations in North America, Europe and Asia. For more information, visit www.zynga.com or follow Zynga on Twitter, Instagram, Facebook or the Zynga blog.

Launched on Facebook in 2009, FarmVille spawned a social gaming franchise that has drawn over 700 million installs worldwide across Facebook, web and mobile platforms. Offering players the ability to grow virtual crops and build digital farms together in real-time, FarmVille has entertained its fans in FarmVille 2, FarmVille 2: Country Escape and FarmVille 2: Tropic Escape. FarmVille 3, a game developed by Zynga Helsinki, aims to reinvent the classic farm building genre and showcase the modern mechanics of mobile gaming. 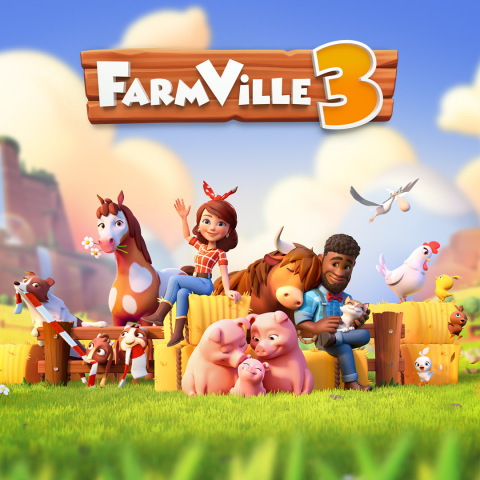