DALLAS--(BUSINESS WIRE)--Guardians of the Gulf, an eye-opening documentary that explores the tumultuous relationship between the Gulf of Mexico and the conservationists determined to protect it, has been selected to premiere at the all-digital LA Femme International Film Festival October 15 – 18. Mary Kay Inc., serving as executive producer, with Media One in partnership with The Nature Conservancy, visited the coasts of Texas, Alabama and Mexico to shed light on the often-untold stories of Gulf preservation.

Filmed, directed and produced by an all-female crew, Guardians of the Gulf is slated for its global digital premiere on Friday, October 16, 5:00 p.m. PST, with a Q&A including film makers and stars to immediately follow.

Guardians of the Gulf Synopsis:
The Gulf of Mexico has long been impacted by catastrophic natural disasters like hurricanes, overfishing, agricultural run-off and oil spills. However, it continues to support one of the most biodiverse ecosystems on Earth with over 15,000 species. This resilience is tenuous. Like any relationship—only so much can be taken without giving back.

In Guardians of the Gulf, the Gulf of Mexico is given a voice by her caretakers to tell a story of generosity and strength. These conservationists, fisherpeople, tour operators, chefs and student leaders strive to improve sustainability in their work and community. Through action, they see change. Through change, they see hope.

The LA Femme International Film Festival is a premiere film festival celebrating, supporting and advancing content creation by women producers, writers, and directors from around the world. The festival has advanced the careers of over 1,000 artists and continues to offer educational seminars, programming and networking events in a nurturing indie environment.

Quotes:
“Water isn’t a single issue. It touches every facet of modern life and the only evidence we need for this is the Gulf of Mexico. Where some see its mounting interdependencies as a challenge too great, we see opportunity and a chance to bring more people along with us, as we innovate solutions and change the trajectory for the hardest-working body of water in the world. After watching Guardians of the Gulf, it’s our hope that viewers will have a newfound appreciation for not only the Gulf but the tireless and collaborative efforts being made to sustain it for generations to come.”
Laura Huffman, former Regional Director of The Nature Conservancy in Texas and featured in Guardians of the Gulf

“While learning about the Gulf of Mexico and its recent history, we found ourselves overwhelmed by the depth of its tragedies and their impact. But then we met the incredible people of the Gulf and we quickly acknowledged that a story of hopelessness didn’t fit. We wanted to reflect the strength and resilience of the Gulf in the film’s narrative to give the ecosystem a voice to inspire action and hope.”
Cait Martin Newnham, Director of Guardians of the Gulf

“While we were making Guardians of the Gulf, we fell in love with the Gulf of Mexico. She emerged quickly as a character who is generous, adaptable and powerful. The Gulf gives life and a route for migration to over 15,000 species, and provides humans with food, income and protection from natural disasters. Her reach is far, and her plight is symbolic of the global climate crisis.”
Ulla Laidlaw, Director of Guardians of the Gulf

“One of the most pervasive themes of this documentary is hope. Hope that we are not just maintaining the Gulf of Mexico but how action can result in tangible change. With hope, more people are motivated to take action, and the wave of sustainability continues to swell. The all-female team did an incredible job capturing the dynamism of the Gulf of Mexico. The documentary showcases the people fighting to protect the Gulf and the ability to make change happen. Our hope is Guardians of the Gulf inspires curious minds to learn how they can act locally to impact global sustainability.”
Julia Simon, Chief Legal, Communications and Social Impact Officer for Mary Kay Inc.

One of the original glass ceiling breakers, Mary Kay Ash founded her beauty company more than 56 years ago with three goals: develop rewarding opportunities for women, offer irresistible products, and make the world a better place. That dream has blossomed into a multibillion-dollar company with millions of independent sales force members in nearly 40 countries. Mary Kay is dedicated to investing in the science behind beauty and manufacturing cutting-edge skin care, color cosmetics, nutritional supplements and fragrances. Mary Kay is committed to empowering women and their families by partnering with organizations from around the world, focusing on supporting cancer research, protecting survivors from domestic abuse, beautifying our communities, and encouraging children to follow their dreams. Mary Kay Ash’s original vision continues to shine—one lipstick at a time. Learn more at MaryKay.com.

About Media One Creative

Since 2012, we’ve been moving audiences to action with an in-house team of experts in creative development, audio and video production. Learn more at mediaonecreative.ca. 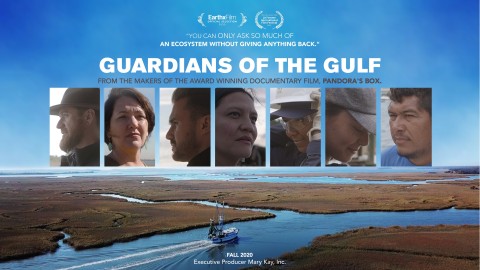 Guardians of the Gulf, produced by Mary Kay Inc., has been selected to premiere at the LA Femme International Film Festival. (Photo: Mary Kay Inc.)