ODENSE, Denmark--(BUSINESS WIRE)--With the latest forecast by the U.S. Travel Association by Tourism Economics predicting $505 billion in losses globally through the end of 2020, UVD Robots announced its autonomous disinfecting robot is being increasingly deployed within hotels, railways, and airports globally. UVD Robots’ mobile, fully autonomous robot integrates UVC light and a large number of disinfection-specialized apps to disinfect against viruses and bacteria not only on surfaces, but the air as well, providing a fully comprehensive infection control and prevention solution.

“As the travel and hospitality industry looks to bring travelers back, they are working to meet new and heightened expectations for safety and cleanliness in order to build trust,” said Per Juul Nielsen, CEO of UVD Robots. “Because our UVD Robots are simple, safe and effective, we are working with an increasing number of hotels, airports, railways and others to bring hospital-grade disinfection solutions to these facilities. We couldn’t be more thrilled than to play a role in the recovery of this industry.”

- YOTEL Boston announced it has implemented the UVD Robots technology to clean select cabins when vacant with all high-touch public spaces also being disinfected upon closing.

- UVD Robots has been operational at Heathrow Airport in London for several months.

Several additional projects are also currently being carried out in the travel industry within the Middle East, including the Hamad International Airport in Qatar.

UVD Robots is a subsidiary of one of the world's leading groups in the development of professional service robots, Blue Ocean Robotics, that also includes subsidiaries like GoBe Robots, PTR Robots and Mink Robots. Blue Ocean Robotics is headquartered in Europe’s “robot capital” Odense in Denmark. 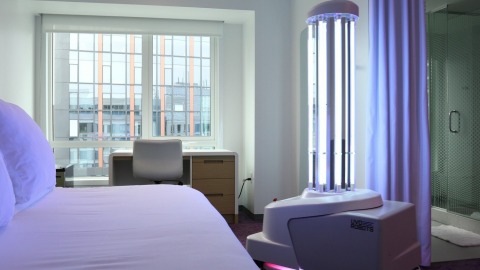 “Right now it’s critical for the hospitality industry to not only enhance how we protect travelers but also provide them with reassurance that we’re taking every possible step from check-in to check-out,” said Trish Berry, General Manager, YOTEL Boston. An extension of YOTEL’s operation #SmartStay safety measures, the UVD Robot, named ‘Vi-YO-Let’, will offer an even deeper level of disinfection throughout high-touch public spaces and select cabins at YOTEL Boston. Photo credit: YOTEL Boston.