SES S.A. announced today the successful launch and pricing of a bond offering in which it has agreed to sell senior unsecured fixed rate notes due in 2028 for a total amount of EUR 400 million. The notes will bear a Coupon of 2.00% per annum and were priced at 99.445% of their nominal value.

SES is rated Baa2 by Moody’s (with negative outlook) and BBB- by Standard & Poor’s (with stable outlook). Proceeds of the issuance will be used for general corporate purposes which includes the refinancing of existing debt.

With this transaction, which was oversubscribed by 2.5 times, SES has taken advantage of the current attractive market conditions to further strengthen its liquidity profile ahead of a EUR 650 million senior debt maturity in March of next year, whereby the residual EUR 250 million will come from cash at hand. As a result of today’s transaction, SES has no senior debt maturities to be refinanced until 2023.

BNP Paribas, Deutsche Bank, ING, J.P. Morgan, SMBC Nikko and Société Générale acted as Joint Bookrunners. The settlement is scheduled for 2 July 2020 and application has been made for the notes to be listed on the Luxembourg Stock Exchange. The securities were placed with a broad range of institutional investors across Europe.

Sandeep Jalan, Chief Financial Officer of SES, commented: “We are pleased to have secured this financing which allows us to proactively refinance an upcoming debt maturity at more favourable terms. The successful conclusion of this bond offering reflects the market's view of SES as a strong investment grade credit, and underlines the ability of SES to secure funding at attractive terms."

In addition to (and without prejudice to) the foregoing, in the European Economic Area this press release is directed only at persons who are not retail investors. For these purposes, a retail investor means a person who is one (or more) of: (i) a retail client as defined in point (11) of Article 4(1) of Directive 2014/65/EU (“MiFID II”); (ii) a customer within the meaning of Directive 2002/92/EC, where that customer would not qualify as a professional client as defined in point (10) of Article 4(1) of MiFID II; or (iii) a “qualified investor” within the meaning of Article 2(1)(e) of the Prospectus Directive (Directive 2003/71/EC as amended by Directive 2010/73/EU).

With respect to the United Kingdom, this press release is only directed at (i) persons who are outside the United Kingdom, (ii) to investment professionals falling within Article 19(5) of the Financial Services and Markets Act 2000 (Financial Promotion) Order 2005 (the “Order”) or (iii) high net worth entities, and other persons to whom it may lawfully be communicated, falling within Article 49(2)(a) to (d) of the Order (all such persons together being referred to as “relevant persons”). Any securities will only be available to, and any invitation, offer or agreement to subscribe, purchase or otherwise acquire such securities will be engaged in only with, relevant persons. Any person who is not a relevant person should not act or rely on this document or any of its contents.

SES has a bold vision to deliver amazing experiences everywhere on earth by distributing the highest quality video content and providing seamless connectivity around the world. As the leader in global content connectivity solutions, SES operates the world’s only multi-orbit constellation of satellites with the unique combination of global coverage and high performance, including the commercially-proven, low-latency Medium Earth Orbit O3b system. By leveraging a vast and intelligent, cloud-enabled network, SES is able to deliver high-quality connectivity solutions anywhere on land, at sea or in the air, and is a trusted partner to the world’s leading telecommunications companies, mobile network operators, governments, connectivity and cloud service providers, broadcasters, video platform operators and content owners. SES’s video network carries over 8,300 channels and has an unparalleled reach of 367 million households, delivering managed media services for both linear and non-linear content. The company is listed on Paris and Luxembourg stock exchanges (Ticker: SESG). Further information is available at: www.ses.com 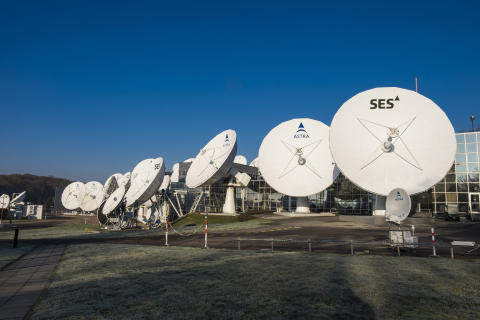