The VIP Signing Ceremony took place at the Oceanographic Institute on the final evening of the Monaco Yacht Show and was attended by HSH Prince Albert II of Monaco, AMAALA Chief Executive Officer Nicholas Naples, the AMAALA Advisory Board, select partners of the brand and esteemed guests. The signing was followed by a VIP dinner prepared by 3-Star Michelin Star Chef Mauro Colagreco.

Chief Executive Officer Nicholas Naples of AMAALA said: “We are very selective with whom we align, as is The Prince Albert II of Monaco Foundation. Their mission to raise awareness of the impact of human activities on the natural environment, encourage more environmentally-friendly behaviour, and promote innovative solutions, makes the Foundation a natural fit for AMAALA. We are committed to fully sustainable development throughout the design, build, and operation phases, which includes being net carbon neutral from the start of operations. We plan to create a coastal oasis that not only flourishes but a place that elevates the role of responsible tourism globally.”

H.E. M Bernard Fautrier, Vice President and CEO of the Prince Albert II of Monaco Foundation said: “The impact of human activities on the ocean has been devastating, and through our partnership with AMAALA, we look to come together and raise awareness of that impact, integrating environment preservation and sustainability into the heart of the future. Monaco has long-been committed to the environment, and we look forward to working alongside AMAALA to safeguard the biodiversity of the Red Sea, taking actions for future.”

Professor Patrick Rampal of Centre Scientifique de Monaco added: “We are very pleased to have entered into this partnership with AMAALA, which will allow us to pursue innovative areas of research in a previously undiscovered location. This project will allow us to, collaboratively, better understand the biology of corals in order to better protect their ecosystems. The Red Sea corals offer exceptional characteristics, in particular their resistance to environmental stresses, which will be interesting to explore with Saudi researchers.”

This event marks the first partnership for AMAALA which is anchored around the three pillars of wellness and sports, art and culture, and sun, sea, and lifestyle. The destination of AMAALA, referenced by the press as part of the Riviera of the Middle East, is dedicated to sustainable building practices, with environment preservation and enhancement paramount to the success of the ambitious project. Developing sustainable yachting practices will also be a goal for AMAALA. Only 2,005 miles from Monaco which equates to six days of cruising on average, AMAALA is the ideal haven for sailors and water lovers to extend the Mediterranean yachting season.

The signing was the culmination of participation in the Monaco Yacht Show where AMAALA also hosted its inaugural Advisory Board Meeting. AMAALA, who participated in the third Monte Carlo Gala for the Global Ocean, welcomed its Advisory Board Members and select guests to the celebration. This major fundraising event gathers international artists and philanthropists for an exclusive gala in favour of the Foundation’s worldwide initiatives dedicated to a sustainable ocean. Long-time champion for climate change action Robert Redford was honoured for his global environmental contributions.

AMAALA is part of The Red Sea Collection which, alongside NEOM and The Red Sea Project, participated at the Monaco Yacht Show for the second year. The Red Sea Collection showcased the Kingdom’s west coast, one of the world’s pristine paradises, to the superyacht industry and sailing lovers and sponsored two key show events – The Yacht Summit and the Inaugural Awards Gala, both on 24 September. 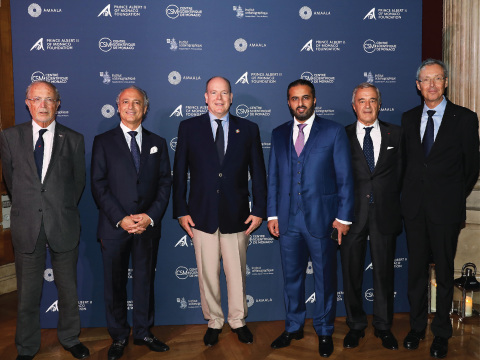