BRUSSELS--(BUSINESS WIRE)--His Excellency Antonio Tajani, President of the European Parliament, stressed the importance of joint efforts to ensure security and stability in the Middle East during a meeting with Her Excellency Dr Amal Al Qubaisi, Speaker of the UAE Federal National Council (FNC), on January 9 at the headquarters of the European Parliament in Brussels.

Commending the developing relations between the UAE and the EU, His Excellency Antonio Tajani praised the UAE’s approach of promoting tolerance and empowering women and youth, and appreciated the UAE’s declaration of 2019 as the Year of Tolerance. He also highlighted FNC’s role in driving international parliamentary efforts to counter terrorism and extremism.

The two dignitaries discussed ways to enhance relations between the UAE and EU countries. They emphasized the importance of collective commitment among the world’s nations to avoid instigating sectarian tensions and supporting terrorist militias, as well as joint efforts to combat terrorism and extremism and eliminate sources of funding for extremist ideologies.

Pointing out the importance of the exhibition organized by the Emirates Red Crescent at the European Parliament’s headquarters, His Excellency Antonio Tajani said: “The exhibition introduces Europeans to the humanitarian efforts of the UAE. The country has become a global model for promoting peace and stability through its humanitarian role in Yemen and its assistance to victims of disasters and crises as the largest international aid donor relative to GDP.”

Her Excellency Dr Al Qubaisi said: “The UAE is keen to strengthen synergies with the European Parliament in view of our common vision on various issues, notably the aspirations for a secure and stable future for the world. The country has provided humanitarian assistance to more than 100 nations, having dispensed aid worth over US$32 billion from 2013 to 2017.”

She also discussed the UAE’s position on the legitimate restoration of its three islands occupied by Iran through direct official negotiations or recourse to the International Court of Justice. Furthermore, she called on the EU to leverage its strong relations with relevant countries to reach peaceful resolutions to crises around the world, and to urge Iran to stop undermining the stability of the region through sponsoring terrorism. 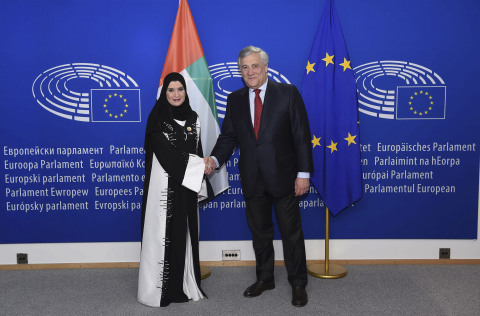