TOKYO--(BUSINESS WIRE)--The Tokyo Good Manners Project (TGMP) is a general corporate judicial person that was established in September 2016 to promote a project that seeks to improve manners in new ways within the cosmopolitan metropolis, Tokyo.

With the objective of making Tokyo a more appealing city, TGMP seeks to pursue activities on a permanent basis that provide a new approach for improving the manners of Tokyo residents and tourists.

The notion of improving manners in a city brings to mind public manner awareness campaigns that are conducted in cities around the world and focused on objectives such as getting people to not litter and to follow transportation rules. However, this project is not an effort focused on educating people about manners. This is because the quality of manners in Tokyo is held in high regard by the rest of the world.

According to the results of a survey by TGMP on “images of Tokyo,” almost 70% (64.9%) of foreigners answered that “People have good manners.” However, the corresponding figure among Tokyo residents was only less than 30% (24.6%), which indicates a large perception gap between foreigners and the residents of Tokyo. We see this as a sign that Tokyo residents have an extremely low opinion of themselves.

TGMP is featuring “TOKYO GOOD,” a concept that seeks to display what is good about Tokyo so that each and every resident of Tokyo takes pride in their good manners and visitors to Tokyo from all over the world can enjoy good manners as a form of culture. Under the banner of this concept, TGMP is taking action in various ways.

TOKYO GOOD MUSEUM is an action that embodies this concept. This activity makes use of Tokyo as an art museum without form, visualizing the good manners found in people, objects, and actions as pieces for display that will be disseminated to the public.

The editorial staff of the TOKYO GOOD MUSEUM will engage in two initiatives to demonstrate to the world its work via the framework of the museum. One will be “manner curation,” which culls the content of TOKYO GOOD that either already exists in Tokyo or can be spotlighted through recommendations and posts from Tokyo residents and inbound tourists. The other is “manner creation” that seeks to generate ideas for solving problems and envision what the concept of good manners can be.

Please expect great things from the Tokyo Good Manners Project as we seek to reform the attitudes of Tokyo residents toward manners and disseminate to the world TOKYO GOOD as a form of culture. 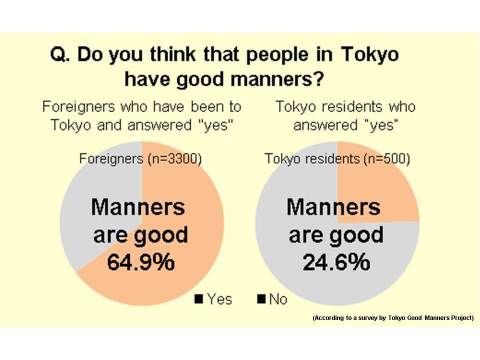 Do you think that people in Tokyo have good manners? (Graphic: Business Wire)