TOKYO--(BUSINESS WIRE)--Warehouse TERRADA (Shinagawa, Tokyo / CEO: Yoshihisa Nakano) is pleased to announce that PIGMENT, an art supply lab operated by Warehouse TERRADA, is going to offer art supplies to Liu Xiaodong in order to support this world famous painter and his artist work.

Liu Xiaodong is a painter of modern life, whose large-scale works serve as a kind of history painting for the emerging world. He locates the human dimension to such global issues as population displacement, environmental crisis and economic upheaval, but through carefully orchestrated compositions, he walks the line between artifice and reality. PIGMENT, an art supply lab by Warehouse TERRADA is collecting, displaying and selling rare art supplies such as over 4200 colors of pigments and more than 200 antique ink sticks, which is helping artists to find their styles of expression and inspiration. As a part of these contributions, PIGMENT is going to offer its art supplies for Liu Xiaodong’s creation in Shanghai starting from September 2016. Warehouse TERRADA is contributing to the development of art and culture through this support.

I am excited to hear that Warehouse TERRADA trusted me and decided to offer me art supplies. The MATSUDA acrylic colors which I received from PIGMENT were very high quality, and as wonderful as the colors from GOLDEN in the US which I have believed the best. Examining the quality of acrylic color, I believe the “metallic texture” of the surface is very important, and it is a unique feature that oil or watercolors never have. This texture will also be very essential for my next work, therefore, I expect that MATSUDA acrylic colors will bring about good effects.

Liu Xiaodong was born in 1963 in Liaoning province, China. He has a BFA and an MFA in painting from the Central Academy of Fine Arts, Beijing, where he now holds tenure as professor. He is an international artist based in Beijing, and undertakes various projects in various countries such as Tibet, Japan, Italy, the UK, Cuba and Austria. Recently he had solo exhibitions at Palazzo Strozzi, Florence (2016) and Fondazione Giorgio Cini, Venice (2015).

His exhibition is being held at the Chronus Art Center in Shanghai from September 17th to December 30th.
URL for reference: http://www.chronusartcenter.org/en/datumsoria/
Interview video: https://www.youtube.com/watch?v=-FFBdXn2E6Q
His works describe emerging world and serve as a kind of history painting.

PIGMENT is an art supply lab operated by Warehouse TERRADA. It opened in July 2015 to become a bridge between manufacturers producing fine materials and artists who need them and to support and develop Japanese young artists to be international. PIGMENT selects items of Japanese brands, focusing on the quality of their materials, and over 4200 colors of pigment are in store.
While PIGMENT is selling art supplies, the experts of painting tools rich in knowledge will offer advices about the features of the tools and instructions of how to use them.
URL: http://pigment.tokyo/

Since the foundation in 1950, Warehouse TERRADA has been cultivating better storage techniques and making proactive action on the capital investment in order to store and preserve items under the best environment. Expanding its business beyond the traditional warehousing, the Company is currently pursuing the preservation and restoration technique to raise the value of stored items and pass it on to the next generations. Warehouse TERRADA is also developing a business to create a hub to output the new culture by making a full use of its knowledge as a professional in space creation. Its storage technologies for items that require high expertise such as artworks, audio-visual media, and wines have been receiving a great reputation by each industry. 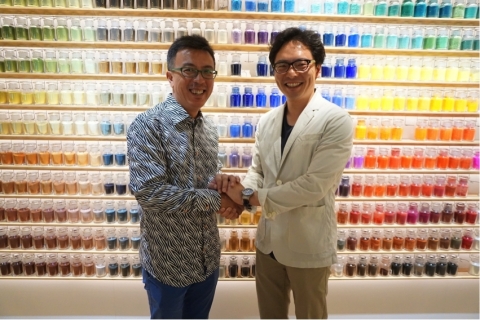