HOUSTON--(BUSINESS WIRE)--ZTE USA, the fourth largest smartphone supplier in the U.S. and second largest in the no-contract market*, and the Houston Rockets concluded their third annual Season of Giving by wrapping up the third of three events in the Houston area. Throughout the past two months, ZTE employees, and members of the Rockets organization, players and staff, completed various charitable activities that impacted those in need during this holiday season.

“We are extremely proud to be able to partner with the Rockets and give back to the local community in Houston through the Season of Giving,” said Lixin Cheng, chairman and CEO of ZTE USA. “We are committed to impacting the lives of those less fortunate in all communities we live and operate in.”

“We are honored to have worked with ZTE on enriching the lives of those less fortunate throughout our city,” said Rockets Chief Executive Officer Tad Brown. “We thank our partners at ZTE for helping make this year’s Season of Giving events a success.”

The Season of Giving included three events hosted by ZTE and the Rockets:

Partnering with Target Hunger, several families were identified within their program that had the greatest need for support this holiday season. Assisted by Rockets players during the event, each family received a gift card to purchase groceries for their Thanksgiving dinner.

Joystix Classic Games and Pinballs opened their facility to children from the Fifth Ward Enrichment Program and the Boys and Girls Club of Greater Houston for an all evening arcade frenzy. From classic games such as pinball machines to air hockey and hundreds of others, children spent the evening playing games and having fun. Each child was also provided with a gift to take home and enjoy.

A Night at the Museum

Working with the Children’s Museum of Houston, children from four local charities had an all-night, hands-on experience where they were able to play and learn from exhibits focusing on science, technology, engineering and math. The children also received a gift after the night was over containing toys they can play with this holiday season.

ZTE USA (www.zteusa.com), headquartered in Richardson, Texas, is a subsidiary of ZTE Corporation, a global provider of mobile devices, telecommunication systems, and enterprise solutions. Operating since 1998, ZTE USA is dedicated to making cost-efficient, quality communication technology accessible to all. ZTE is ranked by independent industry analysts as the fourth-largest supplier of mobile devices in the U.S. overall, and second-largest supplier of prepaid devices. 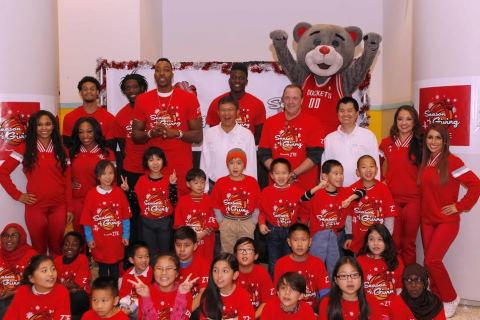