Innovation Is Not An Option. It Is A Must.

The MOU followed the official launch of the Australia Trade Efficiency Assessment with government and private sector experts that will perform a diagnostic evaluation of Australia’s trade practices against what technology makes possible today. The assessment will provide recommendations of how the use of digital tools will reduce Australia’s trade costs, increase trade and create jobs. Furthermore, the Digital Economy will contribute towards achieving the Trans-Pacific Partnership (TPP) as well as Regional Comprehensive Economic Partnership (RCEP) goals.

Similar assessments were conducted in G20 countries Indonesia, KSA and Turkey (in-process) as well as Malaysia. The results yielded that 81% of trade participants have no system and 88% want the proposed Digital Economy Platform. To date more than 22% of the world’s population comprising 1/3 of the G20 citizens want the Digital Economy.

Ms. Carnell stated, “In the shadow of the disappointment surrounding the delay in the implementation of the ‘Bali Package’ measures on trade facilitation, ACCI is pleased to join with GCEL on a global private sector led initiative to reduce time and costs in international trade, which could lead to enormous economic growth and job creation opportunities.”

The global 18-month HumaWealth Program will empower the Digital Economy by providing the tools unleashing the power of 21st-century technology delivering a new era of integrated e-commerce, e-finance, e-insurance, e-logistics and e-grants to achieve new levels of trade efficiency. The Program involves pan-regional organizations worldwide including the Organization of American States, African Union, League of Arab States, Organisation of Islamic Cooperation, among others, plus major economies including G20 countries India, Indonesia, Turkey and Saudi Arabia.

Captain Salloum stated, “We are pleased to start this partnership with ACCI and look forward to present the results of the assessment to Australia’s technology and financial industries providing the information to join their colleagues around the world in an equal opportunity request for proposal process providing a new USD 6 trillion market deploying the Digital Economy Platform.” 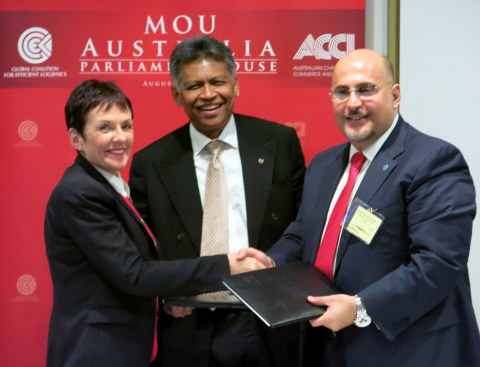