NEW DELHI--(BUSINESS WIRE)--Embraced by international organizations as well as public and private sector leaders in India, the Confederation of Indian Industry (CII) and the Global Coalition for Efficient Logistics (GCEL) officially released of the India Trade Efficiency Assessment, conducted by GCEL’s research team in cooperation with the India Ministry of Shipping, Indian Institute of Management Udaipur (IIMU) and CII. The assessment diagnosed India’s trade practices against what technology makes possible today and recommends how India can capitalize on its technology and human capital strengths to reduce its annual trade costs by USD 40.5 billion, increase trade by USD 161 billion, access a new USD 6 trillion services market opportunity and creating a USD 1 trillion SME fund thus generating millions of jobs.

The India Trade Efficiency Assessment was officially presented to the Ministry of Shipping, Ministry of SMEs, Indira Gandhi National Open University (IGNOU) as well as CII.

This trade efficiency assessment marks the first step towards India’s leadership in empowering the Digital Economy through GCEL’s 18 month HumaWealth Program that provides the roadmap and the tools to unleash the power of 21st Century technology by delivering a new era of integrated e-commerce, e-finance, e-insurance, e-logistics and e-grants to achieve new levels of trade efficiency.

Similar assessments were conducted covering 40% of Asia’s and 22% of the world’s population with government and private sector experts in G20 countries Indonesia, KSA and Turkey (in process) as well as Malaysia. The results were staggering: 81% of trade participants have no system and 88% want the proposed Digital Economy Platform. To date 1/3 of the G20 citizens want the Digital Economy. GCEL plans to conduct Trade Efficiency Assessments for the remaining 15 G20 countries to present the voice of the people to their leaders.

Strategic discussions were also held with Indian officials regarding the role of the E-Hub of the World that will maintain and enhance the engine that empowers the Digital Economy delivered by the top technology firms and placed at the fingertips of the end users at no cost. 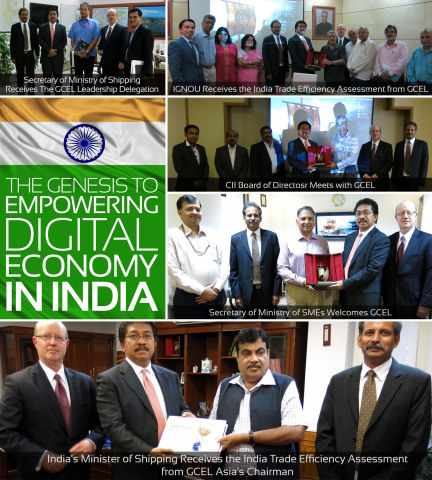