SHIJIAZHUANG, HEBEI, China--(BUSINESS WIRE)--Muhtar Kent, Chairman and Chief Executive Officer of The Coca-Cola Company, today inaugurated Coca-Cola China’s 43rd plant in China and its first in Shijiazhuang, Hebei. The new plant represents a US$106 million (RMB 650 million) investment and is part of a greater three-year, US$4 billion current investment plan for 2012-2014 that underscores Coca-Cola’s continued confidence in and commitment to China.

“Coca-Cola’s investment in China is strategically important in achieving our 2020 Vision goals, and largely possible due to our partnerships with COFCO and our other bottling partners,” said Kent. “This new plant in Shijiazhuang will help Coca-Cola create a lasting positive impact in the community and contribute to a sustainable future for the people of Hebei.”

The 170,000-square-meter (42 acres) plant begins bottling with both sparkling and still beverage lines producing Coca-Cola, Sprite, Fanta, and Minute Maid. Three additional lines will be installed over the next few years. With a population of more than 72 million and a per capita GDP of US$5,259, Hebei province has become one of the country’s most important growth markets.

The capital investment provides 2,000 jobs and generates 20,000 indirect job opportunities in the local community. The new Hebei plant implements Coca-Cola’s stringent conservation and source water protection plans and efficiently manages water use by reusing treated wastewater and replenishing water used back to the community. These efforts are part of the Company’s commitment to accelerate business growth in a responsible and sustainable manner.

“Coca-Cola’s bottling business is of strategic importance to the COFCO Group as it provides consumers with a full range of beverage choices,” said Zhang Jixiang, President and Chief Operation Officer of COFCO Coca-Cola. “Today’s inauguration of this world-class plant is a major milestone. Upon completion, it will become the largest of our 12 Coca-Cola bottling plants in China.”

With bottling plants in all five provinces of North China, this latest addition underpins Coca-Cola’s ability to deliver a robust portfolio of products that meet the increasingly diversified needs of consumers in China’s fast-growing beverage market. Hebei has generated more than 2.4 billion servings annually and delivered double-digit cumulative average annual growth since 2008.

The Coca-Cola Company (NYSE: KO) is the world's largest beverage company, refreshing consumers with more than 500 sparkling and still brands. Led by Coca-Cola, one of the world's most valuable and recognizable brands, our Company's portfolio features 16 billion-dollar brands including Diet Coke, Fanta, Sprite, Coca-Cola Zero, vitaminwater, Powerade, Minute Maid, Simply, Georgia and Del Valle. Globally, we are the No. 1 provider of sparkling beverages, ready-to-drink coffees, and juices and juice drinks. Through the world's largest beverage distribution system, consumers in more than 200 countries enjoy our beverages at a rate of more than 1.8 billion servings a day. With an enduring commitment to building sustainable communities, our Company is focused on initiatives that reduce our environmental footprint, support active, healthy living, create a safe, inclusive work environment for our associates, and enhance the economic development of the communities where we operate. Together with our bottling partners, we rank among the world's top 10 private employers with more than 700,000 system associates. For more information, visit Coca-Cola Journey at www.coca-colacompany.com, follow us on Twitter at twitter.com/CocaColaCo, visit our blog, Coca-Cola Unbottled, at www.coca-colablog.com or find us on LinkedIn at www.linkedin.com/company/the-coca-cola-company.

Coca-Cola is one of the most well-known international brands in China, with a leading position in the soft drinks market. Since re-entering China in 1979, Coca-Cola has invested more than US$5 billion in the local market, including US$ 3 billion investments from 2009 to 2011. Coca-Cola has established a total of 43 plants in China. The Coca-Cola system employs more than 50,000 people, virtually 99 percent of whom are local hires. Coca-Cola and its bottlers have always been active corporate citizens in China, promoting sustainable environmental projects and development of local communities through education and cooperative public-private endeavors with a total contribution of over RMB 200 million in China. Coca-Cola is also the only corporation that has sponsored Special Olympics, Olympic Games, Paralympic Games, EXPO and Universiade in China. For more information about our company, please visit our Website at www.coca-cola.com.cn or follow our corporate micro-blog at weibo.com/cokechina. 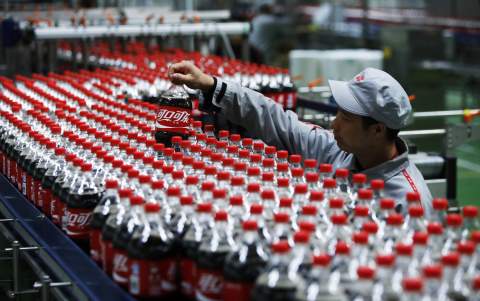