MONTE CARLO--(BUSINESS WIRE)--Hamdi Ulukaya, the Founder, President and CEO of Chobani, based in the United States, was last night named the Ernst & Young World Entrepreneur Of The Year 2013 at an awards ceremony held in Monte Carlo’s Salle des Etoiles. Hamdi was picked from among the 49 country finalists vying for the title across 47 countries, each of whom had already been named the Ernst & Young Entrepreneur Of The Year in their home countries.

Turkish-born Hamdi Ulukaya founded Chobani in upstate New York in 2005 and launched Chobani Greek Yogurt two years later. Less than six years after launch it is the best-selling yogurt brand in the US with annual sales approaching US$1bn. Chobani has 3,000 employees and operates the largest yogurt factory in the world selling its products to Australia and the UK as well as the US.

Rodrigo Herrera, CEO and Chairman of Genomma Lab Internacional and Chairman of the judging panel said, “Hamdi personifies the entrepreneurial spirit and is a real role model for any aspiring entrepreneur. The judges were impressed by his courage and perseverance.”

Hamdi Ulukaya said, “I’m delighted and honored to receive this award and I would like to dedicate this to our fans, employees, local communities and health professional friends. Without them, none of our successes would have been possible.”

“Hamdi has rightly been called the personification of every immigrant’s American dream,” said Maria Pinelli, Ernst & Young’s Global Vice Chair for Strategic Growth Markets. “He has achieved fantastic success in a relatively short space of time.”

“Over the past 26 years, entrepreneurs have done more than any other group to stimulate innovation, job creation and prosperity during both periods of growth and in more challenging economic conditions. Hamdi epitomizes the vision and determination that set entrepreneurs apart and is very worthy of the title Ernst & Young World Entrepreneur Of The Year 2013.”

“Although Hamdi is truly an inspiring World Entrepreneur Of The Year 2013, the 49 women and men whom we honored tonight and the thousands of entrepreneurs who enter this program every year are all winners. Now more than ever, we must acknowledge, celebrate and learn from these remarkable people.”

Broadcast coverage and an interview with the winner will be available to download for broadcast and online use at: https://broadcast.ey.com/stories/7538

About Hamdi Ulukaya and Chobani, Inc

When it comes to making yogurt, Turkish-born entrepreneur Hamdi Ulukaya has the magic touch. Chobani Greek Yogurt, which he launched in 2007, is already the best-selling brand of yogurt in the US. Made using a centuries-old technique of straining to remove excess liquid, it comes in a wide range of flavors from plain to mango, passion fruit and strawberry banana.

Hamdi was born into a dairy-farming family in eastern Turkey, but he moved to the US in 1994 to learn English and pursue business school. He never finished business school. Instead, he started making feta cheese in upstate New York in 2002 after his father visited and complained about the quality of cheese on sale.

Three years later, Hamdi bought a closed-down yogurt factory, despite being advised against it by friends, and founded his company Chobani. He started out with five employees and it took a year and a half to develop the product. In 2009, Hamdi signed a major deal with leading US grocery wholesaler Costco and today Chobani’s annual sales are approaching US$1b. It has a workforce of 3,000 and sells its products in Australia and the UK, as well as in the US. Chobani’s newest US manufacturing facility is the largest yogurt factory in the world.

As an immigrant, Hamdi believes in embracing change and improving communities. So, 10% of Chobani’s profits are donated to the company’s charitable foundation, Shepherd’s Gift Foundation. The company is an official sponsor of the US Olympic team and its corporate philosophy is “Nothing but good.”

About the judging panel

About Entrepreneur Of The Year

Ernst & Young Entrepreneur Of The Year® is the world’s most prestigious business award for entrepreneurs. The unique award makes a difference through the way it encourages entrepreneurial activity among those with potential, and recognizes the contribution of people who inspire others with their vision, leadership and achievement. As the first and only truly global award of its kind, Entrepreneur Of The Year celebrates those who are building and leading successful, growing and dynamic businesses, recognizing them through regional, national and global awards programs in more than 140 cities in more than 50 countries.

Ernst & Young is a global leader in assurance, tax, transaction and advisory services. Worldwide, our 167,000 people are united by our shared values and an unwavering commitment to quality. We make a difference by helping our people, our clients and our wider communities achieve their potential.

This news release has been issued by EYGM Limited, a member of the global Ernst & Young organization that also does not provide any services to clients. 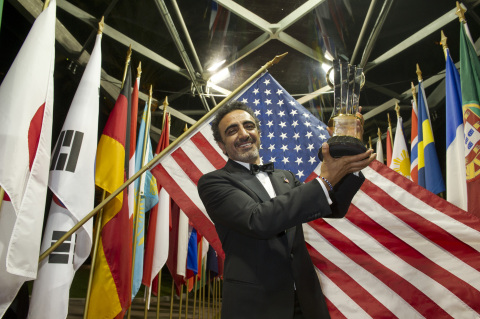