Alcoa Products Used Throughout; Alcoa and Penguins to Jointly Promote Aluminum Can Recycling

PITTSBURGH--(BUSINESS WIRE)--Alcoa (NYSE:AA) today announced it will play a key part in the Pittsburgh Penguins’ and the CONSOL Energy Center’s efforts to be green. Alcoa will work with the Penguins to promote recycling at the new 735,000 square-foot CONSOL Energy Center and throughout Pittsburgh. And Alcoa’s Kawneer unit, the leading supplier of architectural aluminum products and systems for the commercial construction industry, has supplied products that are integral to the new facility’s Leadership in Energy and Environmental Design (LEED) Gold certification, signifying the building as among the most environmentally responsible facilities in the world.

The CONSOL Energy Center is the first National Hockey League (NHL) arena and among the first sporting venues in the world to attain Gold LEED certification. Of the 42 LEED points the CONSOL Energy Center received as part of the rigorous process, nearly 40 percent were aided by using Alcoa's Kawneer products (nine for indoor environmental quality; seven for materials and resources).

Alcoa and the Penguins have been long-time proponents of recycling, with Alcoa recycling approximately 700,000 metric tons of aluminum a year back into new and infinitely recyclable products. For example, as a result of Alcoa programs, an aluminum beverage can is consumed and turned back into a new beverage can in less than 60 days. Alcoa has a stated goal to increase recycling rates in the US from 57 percent to 75 percent by 2015. To help, Alcoa has distributed tens of thousands of recycling bins across the country in the past year. In the new CONSOL Energy Center, Alcoa Recycling will make more than 200 recycling bins available for use inside and outside the facility year-round. The Penguins and Alcoa will also promote recycling in a variety of team vehicles throughout the season – both within the CONSOL Energy Center and throughout Pittsburgh.

The CONSOL Energy Center incorporates a mix of unique and upscale interior and exterior features that bring pride to the team, its fans and the city of Pittsburgh. It was designed and constructed by Kansas City, Mo.-based architecture firm Populous (formerly HOK Sport Venue Event), Pittsburgh-based Astorino architectural firm, a joint venture between construction managers PJ Dick and Hunt Construction and project management firm ICON. The construction team, which also included glazing contractors from Universal Glass & Metals, Inc. and D-M Products, Inc. was not only challenged to create a modern building that would meet the needs of the functional and sustainable requirements of the organization, but to do so in time for the start of the 2010-2011 hockey season.

Tim Mackin, project manager with Pittsburgh-based D-M Products said the biggest triumph was that the facility was completed on time and within budget — a feat for such a major undertaking. The CONSOL Energy Center opened August 18, 2010 with a performance by Paul McCartney. The first Penguins game is scheduled for September 22.

Creating a feeling of openness throughout the facility was a key design element, bolstered by Kawneer’s 1600 Wall System®1 curtain wall which comprises the entire Downtown-facing west side of the facility. Besides providing magnificent views of the city, the serpentine-like glass façade allows daylight to reach deep into the building. Scott Pence, project manager with Kawneer, says there were challenges with the curved nature of the curtain wall’s design. “The wall featured multiple curves and radii, requiring several adjustments to the drawings,” he said, “but we were able to strike a balance between the architects’ visions and the building functions that looked great on the finished product.”

Kawneer’s Trifab® VG (VersaGlaze®) 451T framing, featuring an IsoLock® thermal break, was also utilized on the new arena to help enhance thermal performance and energy efficiency. In addition, 1600 SunShade® was selected for the exterior of the facility to help reduce solar heat gain. With a 30-inch projection, the 1600 SunShade® shades interiors and conserves energy. To match the team colors, the curtain wall and several sunshades were painted Champagne Gold. Throughout the facility no detail was spared in theme and energy conscious design, including the retail shop where racks shaped like hockey sticks were made from bamboo.

The center’s open concourses—only the second NHL arena to utilize this design—allows fans and visitors to leave their seats without missing the action. To handle the wear and tear of the approximately 700,000 people projected to visit the arena annually, Kawneer’s 500 Heavy Wall™ Entrances were incorporated throughout the building. Designed for heavy traffic areas, 500 Heavy Wall™ Entrances feature five-inch vertical stiles and 3/16-inch walls throughout for additional strength and reliability, as well as two framing options to provide a choice for designers.

Alcoa is the world’s leading producer of primary aluminum, fabricated aluminum and alumina. In addition to inventing the modern-day aluminum industry, Alcoa innovation has been behind major milestones in the aerospace, automotive, packaging, building and construction, commercial transportation, consumer electronics and industrial markets over the past 120 years. Among the solutions Alcoa markets are flat-rolled products, hard alloy extrusions, and forgings, as well as Alcoa® wheels, fastening systems, precision and investment castings, and building systems in addition to its expertise in other light metals such as titanium and nickel-based super alloys. Sustainability is an integral part of Alcoa’s operating practices and the product design and engineering it provides to customers. Alcoa has been a member of the Dow Jones Sustainability Index for eight consecutive years and approximately 75 percent of all of the aluminum ever produced since 1888 is still in active use today. Alcoa employs approximately 59,000 people in 31 countries across the world. More information can be found at www.alcoa.com. 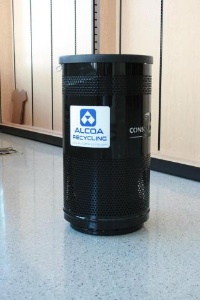 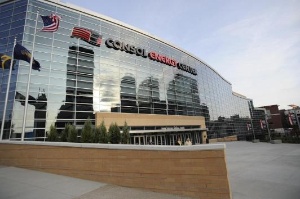 The new CONSOL Energy Center, home of the Pittsburgh Penguins, is the first National Hockey League (NHL) arena and among the first sporting venues in the world to attain Gold LEED certification, signifying the building as among the most environmentally responsible facilities in the world. Of the 42 LEED points the CONSOL Energy Center received as part of the rigorous process, nearly 40 percent were aided by using Alcoa's Kawneer products. (Photo: Business Wire)