MEGTEC Systems today announced that its China subsidiary has been contracted to build the largest plant in the world to capture and eliminate ventilation air methane (VAM) from the Datong coal mine in China's Chongqing municipality. The agreement was formally signed between MEGTEC and a three-way joint venture partnership comprised of AES Climate Solutions Asia (a wholly-owned subsidiary of AES Corporation), Shenzhen Dongjiang Environmental Renewable Power Company Ltd., and Songzao Coal and Chongqing Electricity Company Ltd., a wholly-owned subsidiary of Chongqing Energy Investment Group.

Plans call for the Datong mine VAM system to be operational later this year. It will utilize MEGTEC's proven VOCSIDIZER® technology to eliminate about 97 percent of the methane within the captured exhaust stream before it enters the atmosphere. The system is expected to reduce greenhouse gas emissions by up to 200,000 tons of CO2 equivalent per year. In addition, energy released in the process will be used to heat water for nearby buildings.

"Finalizing the agreement for construction of this VAM system clears the way for what truly is a breakthrough project on several levels," said Mohit Uberoi, MEGTEC President & CEO. "It is by far the largest VAM emission control system anywhere in the world, with six of our VOCSIDIZER units and a capacity of 375,000 Nm3/h (normal cubic meters per hour) of ventilation air.

"This project is an example of technology-based proven solutions for control of greenhouse gas emissions and will set the benchmark for future projects in China and other regions of the world," Uberoi continued, noting that China is rapidly developing its vast coal resources.

China is the largest VAM emission country in the world. Currently, 70 percent of its energy and nearly 80 percent of its electricity stems from coal. Negotiations for construction of the Datong coal mine VAM system began in November 2009, when the partnership was announced.

This greenhouse gas reduction project also has the potential to generate carbon offset (CER) credits. Emissions reduction projects that involve the transfer of technology to an emerging market (China) and are developed under the Clean Development Mechanism (CDM) of the United Nations Framework Convention on Climate Change (UNFCCC) can be considered for CER credits.

"So far the UNFCCC has formally approved CERs from only one VAM abatement project in the world," MEGTEC's Uberoi pointed out. "This is also a MEGTEC system, commissioned in 2008 at the ZhengZhou Mining Group in China's Henan Province."

That system, a single-unit installation, processes around 60,000 Nm3/h of ventilation air, and also generates hot water for local use. Uberoi anticipates that future projects will likewise involve processing hot water while performing their primary task of VAM abatement. Since MEGTEC systems utilize modular units, smaller scale projects can be expanded as needed.

According to Ken Zak, MEGTEC Vice President - Industrial & Environmental Products Group, these systems incorporate patented technology which has been specially modified and extensively tested to operate in VAM environments, based on nearly 15 years of MEGTEC experience in VAM applications.

MEGTEC's patented VAM technology also earned the company an EPA Climate Protection Award from the U.S. Environmental Protection Agency in 2008, in recognition of its systems' ability to turn greenhouse gas into green energy.

Uberoi foresees potential for numerous VAM installations on a global basis to reduce greenhouse gas emissions. Although generating electricity makes maximum use of MEGTEC's VAM technology potential, such systems are more complex and require a much longer lead time than the large-scale Datong mine project in China, according to Ake Kallstrand, Technical Director for MEGTEC VAM technology.

"The gas composition and mine safety considerations also pose unique challenges in implementing VOCSIDIZER technology or, for that matter, other abatement systems," Kallstrand explained. "Over the years, extensive pilot testing in the field along with our in-house research and development work, have given us considerable insight into the special process and technology considerations for applying oxidation technology to VAM applications.

"We are pleased to see more full scale systems such as the one at Datong being deployed," he summed up. "The type of system we are building here and the one already operating at the ZhengZhou Mining Group provide ideal, time efficient and cost effective ways to reduce VAM greenhouse gas emissions while helping China meet its growing energy needs." 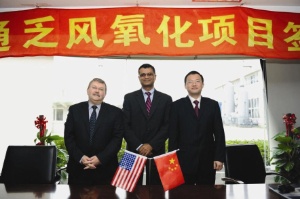