SAN FRANCISCO--(BUSINESS WIRE)--David D. Arnold will become the new president and CEO of The Asia Foundation, the premier non-profit, non-governmental organization working to promote reform, development, and prosperity in Asia. Mr. Arnold will formally begin his new role January 1, 2011, overseeing all aspects of The Asia Foundation, including its field offices across 18 Asia-Pacific nations, offices in San Francisco and Washington, D.C., as well as working closely with Give2Asia, its sister organization. Mr. Arnold is currently the president of the American University in Cairo and is a former Ford Foundation representative who worked for years in India, Nepal, and Sri Lanka. He also served as executive vice president and interim president at the Institute of International Education in New York.

Mr. Arnold succeeds former Congressman Douglas Bereuter as president and CEO, who retires from his leadership position September 30, 2010, having fulfilled a six-year commitment to the Board of Trustees. In a related statement this morning, The Asia Foundation announced it has experienced unprecedented growth and diversification in programming, funding, and staff under Congressman Bereuter’s successful tenure.

“I have known and admired the work of The Asia Foundation for many years, and am honored to be the next president of this visionary organization,” said Mr. Arnold. “Sensitivity, knowledge, and agility have long been hallmarks of the Foundation's programs and people, and the assistance it provides throughout Asia is critical to the future development of the region. I am joining The Asia Foundation with great enthusiasm and a strong commitment to its mission, values, and aspirations."

“David is an experienced leader, a respected educator, and an administrator with a wide-ranging background in development and governance practices in Asia. He possesses the ideal combination of skills needed for the president of The Asia Foundation,” said Michael H. Armacost, chairman of the Board and Executive Committee of The Asia Foundation and former U.S. ambassador and under secretary of state. “Asia is changing and The Asia Foundation is changing. Our field offices and specialists on the ground are pioneering daring, new methods to advance reform, prosperity, and peace, based on deep local networks of partners and staff—our defining approach. David has worked on the cutting-edge of international development, philanthropy, and education and is highly knowledgeable about the areas in which the Foundation works: promoting the rule of law, empowering women, advancing human rights, reforming economic policy, and advancing prosperity, justice and peace in Asia. He has lived and worked for years in Asia and the Middle East, and understands local cultures, structures, and institutions. This combination led the Board to a unanimous decision.”

“Millions in Asia remain under threat and are vulnerable, and societies continue to suffer from impasses and deadlocks,” said Surin Pitsuwan, secretary-general of the Association of Southeast Asian Nations (ASEAN), and a trustee of The Asia Foundation. “Mr. Arnold understands the myriad of challenges facing the region—and he shares our belief that Asians themselves must contribute to, and participate in, Asian reforms and Asian agendas. I have full confidence in him as a leader, and I anticipate his presidency to be deft, robust, and inclusive.”

Mr. Arnold is a skilled and respected veteran of large, successful non-profit organizations active in philanthropy, higher education, international exchange, and development. He maintains a global network of contacts and is uniquely adept at creating international partnerships and alliances. Mr. Bereuter said of the appointment: “David Arnold has shown himself to be a strong and effective leader and I am confident he will guide The Asia Foundation to further heights of achievement and contributions to international development in Asia. He has significant first-hand knowledge, gleaned from living and working in the region, along with practical experience from his innovative work with the Ford Foundation in Asia and his leadership of renowned international educational institutions. I am extremely pleased he has accepted an appointment to be the next president and CEO of the Foundation, and I have no doubt that he will expand upon all the Foundation has already become in its long and productive history."

In 2003, Mr. Arnold became the tenth president of the American University in Cairo. He oversaw the construction of a new, state-of-the-art $400 million campus, including the region's largest English-language library and the first public park in the suburb of New Cairo. He was responsible for spearheading AUC's $125 million fundraising campaign, the largest in the University's history, and also oversaw the launch of several new academic programs, including the University's first Ph.D. program and new masters' programs in education, biotechnology, gender studies, digital journalism, and refugee studies. Under Mr. Arnold's leadership, AUC expanded its continuing education and community outreach programs and created new scholarship opportunities funded by private donors, the U.S. Agency for International Development, and the U.S. State Department's Middle East Partnership Initiative.

Prior to that, he served for six years as executive vice president of the Institute of International Education, the world’s largest educational exchange organization.

Between the years of 1984 and 1997, he worked for the Ford Foundation, serving as its first program officer in the field of governance and then as the organization’s representative in India, Nepal, and Sri Lanka.

Arnold began his public service career in 1975 in his home state of Michigan as a program budget analyst with the Michigan Department of Labor. He moved to Washington, D.C., in 1977 to join the National Governors Association, where he handled intergovernmental relations in the areas of employment, housing, and economic development. He later served as executive director of the Coalition of Northeastern Governors, a regional think tank and policy institute.

Mr. Arnold holds a bachelor’s degree from the University of Michigan and a master’s degree in public administration from Michigan State University.

About The Asia Foundation

The Asia Foundation is a non-profit, non-governmental organization committed to the development of a peaceful, prosperous, just, and open Asia-Pacific region. The Foundation supports programs in Asia that help improve governance, law, and civil society; women's empowerment; economic reform and development; and international relations. Drawing on nearly 60 years of experience in Asia, the Foundation collaborates with private and public partners to support leadership and institutional development, exchanges, and policy research.

With 18 offices throughout Asia, an office in Washington, D.C., and its headquarters in San Francisco, the Foundation addresses these issues on both a country and regional level. In 2009, the Foundation provided more than $86 million in program support and distributed nearly one million books and journals valued at over $43 million. 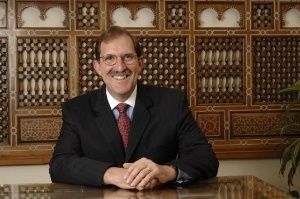 San Francisco--David D. Arnold will become the new president and CEO of The Asia Foundation January 2011. He is a skilled and respected veteran of large, successful non-profit organizations active in philanthropy, higher education, international exchange, and development. Mr. Arnold is the president of the American University in Cairo and is a former Ford Foundation representative who worked in India, Nepal, and Sri Lanka. (American University in Cairo)