BACARDI rum tops more than 300 awards to date. For nearly 150 years, through eight generations of Don Facundo’s descendants, Bacardi has focused on quality, taste and excellence.

BACARDI Gold is a robust, full flavor rum, mellowed in charred American oak barrels. It is amber in color, rich and smooth, with impressions of vanilla and a balance of walnuts, spices and tropical fruits on a subtle background of oak.

BACARDI 8, originally a private spirit for the Bacardí family, is the most sophisticated and complex of the BACARDI Rum family. It is mellowed for more than eight years in carefully selected oak barrels. Following the tradition of Don Facundo’s blending techniques, this spirit has layers upon layers of aroma and flavor.

BACARDI Reserva Limitada, is made from rums that have been mellowed in lightly charred American white oak casks. The resulting rum has a woody aroma and fruit notes with a rich, mellow taste. BACARDI Reserva Limitada should never be mixed since it is the ultimate expression of Bacardi craftsmanship. As the name implies, this is a limited reserve, only available at the Casa Bacardi Visitor Center in Cataño, Puerto Rico, The BACARDI Store in Nassau, The Bahamas, in fine establishments throughout Bermuda, and select islands of the Caribbean.

BACARDI Rum has a reputation for being an innovator. Don Facundo Bacardí revolutionized the world of spirits when he created BACARDI Rum. As the ultimate mixing spirit, BACARDI went on to become the original rum used to create legendary cocktails like the Mojito, the Daiquirí, and the Cuba Libre.

As evident by the International High Quality Trophy award, with BACARDI rum you will find consistency in taste and quality all over the world, as it is specifically blended to the same flavor profile no matter where it is enjoyed.

This summer season, create the perfect cocktail using what the spirit connoisseurs have selected as tops—BACARDI—the most awarded rum in the world. The following recipes are perfect additions to any summer gathering:

Cut the lime in wedges and place in a large highball glass. Add the sugar and muddle to release the lime juice. Add the mint leaves and muddle lightly again to release and combine the flavors. Top up with crushed ice. Pour BACARDI Superior Rum. Swizzle well with a bar spoon to dissolve the sugar. Top up with more crushed ice. Add soda water. Stir well again to combine all the ingredients and garnish with a fresh mint sprig.

Put all ingredients into a mixing glass. Add cubed ice and mix well. Strain into a chilled or frozen glass. Garnish with a preserved cherry.

Put all ingredients in a cocktail shaker and stir until the sugar dissolves. Fill shaker with ½ cubed ice and ½ crushed ice and shake vigorously until chilled. Double strain into a chilled or frozen glass.

Fill a highball glass with cubed ice. Squeeze and drop a fresh lime wedge into the glass. Pour in BACARDI Gold and top with chilled Coca-Cola, ideally bottled. Stir gently.

Combine all ingredients in a blender with ½ cup of crushed ice. Blend until smooth. Can be shaken and strained if a blender is unavailable or a less “smoothie-like” texture is preferred.

About BACARDI Rum - The World’s Most Awarded Rum

In 1862, in Santiago de Cuba, founder Don Facundo Bacardí Massó revolutionized the spirits industry when he created the world’s first premium white rum – BACARDI. The unique taste of BACARDI Rum inspired cocktail pioneers to invent some of the world’s most famous drinks including the Mojito (1862), the Daiquirí (1898) and the Cuba Libre (1900). Today, BACARDI Rum is made in Puerto Rico and Mexico where it is crafted to ensure that the taste remains the same today as it did when it was first blended in 1862.

BACARDI AND THE BAT DEVICE ARE REGISTERED TRADEMARKS OF BACARDI & COMPANY LIMITED.

NOTE: .JPG images of the Quality Awards, trophies, logos and the diploma, as well as images of the BACARDI 8, Gold, and Reserva Limitada brands are available upon request or via BusinessWire. 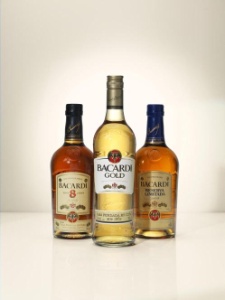