SAN JOSE, Calif.--(BUSINESS WIRE)--Velodyne Lidar, Inc. (Nasdaq: VLDR, VLDRW) today announced that the Company is filing a patent infringement complaint with the U.S. International Trade Commission (ITC) against Ouster, Inc. (Nasdaq: OUST, OUST.WS), requesting that the Commission institute an investigation under section 337 of the Tariff Act of 1930. Velodyne also filed a patent infringement complaint against Ouster in the U.S. District Court for the Northern District of California, seeking an injunction and monetary damages.

Velodyne’s complaint asks the ITC to investigate unlawful imports of Ouster lidar sensors that are alleged to infringe Velodyne’s patents relating to lidar technologies (U.S. Patents 7,969,558 and 9,983,297). Velodyne’s complaint requests that the ITC issue a limited exclusion order and a cease and desist order against Ouster and Ouster’s contract manufacturer, to bar the importation into the United States of Ouster’s rotational lidar devices, components, and products that are alleged to infringe Velodyne’s patents.

Earlier this year, the U.S. Court of Appeals for the Federal Circuit upheld the patentability of all challenged claims in Velodyne’s pioneering 7,969,558 patent. The ‘558 patent relates to a novel lidar-based 3D point cloud measuring system used in multiple industries and applications. Velodyne is focused on advancing its strong smart vision products to meet the large market needs of robotics, industrial, intelligent infrastructure, autonomous vehicles, and advanced driver assistance systems (ADAS), and Velodyne’s patent portfolio protects the substantial investment it is making in these advances.

“Velodyne invented rotational lidar and our Company spends significant financial and human resources on research and development to advance smart vision technology,” said Dr. Ted Tewksbury, CEO, Velodyne Lidar. “Velodyne has a history of vigorously protecting this investment by taking strong and successful legal action against companies that infringe on our intellectual property and this action is no different.”

This press release contains "forward looking statements" within the meaning of the "safe harbor" provisions of the United States Private Securities Litigation Reform Act of 1995 including, without limitation, all statements other than historical fact and include, without limitation, statements regarding Velodyne’s target markets, new products, development efforts, and competition. When used in this press release, the words "estimates," "projected," "expects," "anticipates," "forecasts," "plans," "intends," "believes," "seeks," "may," "will," “can,” "should," "future," "propose" and variations of these words or similar expressions (or the negative versions of such words or expressions) are intended to identify forward-looking statements. These forward-looking statements are not guarantees of future performance, conditions or results and involve a number of known and unknown risks, uncertainties, assumptions and other important factors, many of which are outside Velodyne's control, that could cause actual results or outcomes to differ materially from those discussed in the forward-looking statements. Important factors, among others, that may affect actual results or outcomes include uncertainties regarding government regulation and adoption of lidar, the uncertain impact of the COVID-19 pandemic on Velodyne's and its customers' businesses; Velodyne's ability to manage growth; Velodyne's ability to execute its business plan; uncertainties related to the ability of Velodyne's customers to commercialize their products and the ultimate market acceptance of these products; the rate and degree of market acceptance of Velodyne's products; the success of other competing lidar and sensor-related products and services that exist or may become available; uncertainties related to Velodyne's current litigation and potential litigation involving Velodyne or the validity or enforceability of Velodyne's intellectual property; and general economic and market conditions impacting demand for Velodyne's products and services. For more information about risks and uncertainties associated with Velodyne’s business, please refer to the “Management’s Discussion and Analysis of Financial Condition and Results of Operations” and “Risk Factors” sections of Velodyne’s SEC filings, including, but not limited to, its annual report on Form 10-K and quarterly reports on Form 10-Q. All forward-looking statements in this press release are based on information available to Velodyne as of the date hereof, Velodyne undertakes no obligation to update or revise any forward-looking statements, whether as a result of new information, future events or otherwise, except as required by law. 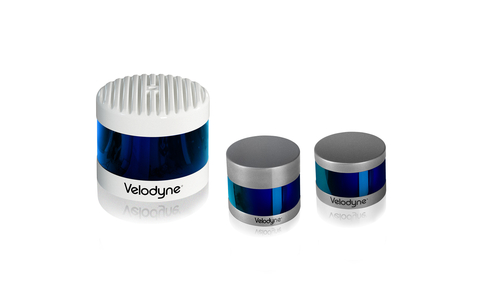