LIMA, Peru--(BUSINESS WIRE)--Chosen by over 100 million votes from all around the globe in 2007, the New 7 Wonders of the World are the most impressive landmarks and popular attractions for tourists. One of them, and perhaps the most mythical, is Machu Picchu.

The citadel of Machu Picchu in Cusco, Peru, was discovered in 1902 by Agustín Lizárraga and made known to the world in 1911 by Hiram Bingham. The "lost" city of the Incas was built in the mid-15th century by orders of the Inca Pachacútec. Although this archaeological center has no name, Machu Picchu, the mountain where it is located, means "Old Mountain" in Quechua. According to investigations, this place served as a resting place for the Inca and was destined to accommodate approximately 300 people.

This urban construction is high up in the Andes with steep drops to the Urubamba River on three sides, surrounded by majestic mountains. The Incas were known master builders but the stonework put together in Machu Picchu is so precise and magnificent that leaves every visitor in awe at the first sight. Here, human intervention went hand in hand with nature and the result is deeply inspiring.

In 2011, an international competition inspired by the list of The New Seven Wonders of the World casted 500 million votes from all over the world and elected The Seven Natural Wonders of the World. Among these wonders, the Amazon rainforest and river stand out as it occupies 60% of the Peruvian territory.

The Amazon is a vast region that surrounds the Amazon River basin - its waters flow along 7,020 kilometers-, through the territories of nine countries including Peru. Considered as “the lungs of the world” and one of the few large natural reserves left on the planet, the Amazon contains extensive jungle areas and endless tropical forests in which they still inhabit many indigenous peoples. Its conservation is paramount to preserve this rich biodiversity and multicultural heritage.

Peru is focused on sustainability and community-based tourism. Visiting the Peruvian Amazon, you will enjoy a true exclusive and immersive experience in the jungle cruisers or lodges and will help us to preserve the environment and the wildlife, all while supporting the traditional way of life of locals. 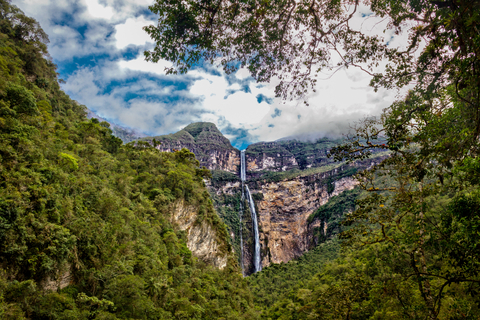 Surrounded by lush green jungle and mountains, Gocta, is one of the highest waterfalls of the world. Located in the northern part of the Peruvian Amazon, one of The Seven Natural Wonders of the World, this hidden gem is waiting to be explored by international tourists. (Photo: Renzo Tasso / PROMPERÚ)