Quan brings 20 years of experience in the automotive and technology sectors in Asia, North America and Europe. As President of Loop Energy Shanghai, he oversees strategic planning, market expansion, manufacturing operations and partnership management for China. Quan joins from a Chinese developer of zero-emission hydrogen power cells for motive applications, where he served as General Manager for three years. He developed a 1,000 hydrogen-electric forklift pilot program and launched China's first commercial fuel cell forklift fleet during his tenure. Previously, Quan served in senior roles with Chetuan.com, lnfor and Mercedes-Benz. He holds an MBA from Goizueta Business School of Emory University.

"I am very excited to join Loop Energy Shanghai to accelerate the commercialization and market expansion of our products in China," said Quan Hu. "Our patented eFlowTM technology, the successful operation of the Nanjing bus fleet and the upcoming launch of our manufacturing facility in Shanghai set a strong foundation to capitalize on the anticipated demand for fuel cell solutions in China. I believe that now is the perfect time to commercialize our fuel cell technology as China pursues its medium- and long-term national hydrogen plan."

Dr. Liu's addition to the Loop Energy Shanghai board brings a deep understanding of the Chinese automotive industry. He is currently the co-founder and Chairman of InnoStone Capital Co. Ltd, an investment management business focused on the rapidly transforming Chinese automotive industry, and sits on the board of Punch Powertrain inc., an automotive transmission supplier. During his 30-year career, Dr. Liu gained experience at international automotive companies Ford Motor Co., WABCO Holdings and Qoros Automotive. Dr. Liu led WABCO in Asia and Europe for eleven years as the President, Asia Region and Global President, Truck, Bus and Car Division. In addition, serving as the CEO of Qoros Automotive and co-founder of Sinogold Automotive he brings experience in China's maturing electric vehicle industry. Dr.Liu holds an MBA from Michigan State University and a Ph.D. in Materials Science and Engineering from the Tokyo Institute of Technology. He will join Loop Energy President & CEO, Ben Nyland and Chief Financial Officer, Damian Towns on the Loop Energy Shanghai Board of Directors.

The appointments come as Loop Energy Shanghai continues its expansion in China. In 2021, the company made significant progress in developing its manufacturing facility to expand its global production capacity with the aim to open in Q2 2022. The Shanghai area-based facility will aim to increase production volumes and service its growing customer base in China reliably.

"We are extremely excited to welcome Quan and Dr. Liu and strengthen the leadership of Loop Energy Shanghai," said Loop Energy President & CEO, Ben Nyland. "We believe that China is committed to harnessing hydrogen to decarbonize its economy, including commercial mobility. We are confident that Quan and Dr. Liu will build upon the strong foundation laid by Vice-President Operations, Kirk Livingston, who will continue to focus on day-to-day operations."

China has announced an ambitious hydrogen strategy, including developing Beijing, Shanghai, Guangdong, Henan and Hebei into hydrogen cities and city clusters by electrifying transit and investing in clean energy. Both state-owned enterprises and the private sector have invested billions of RMB in hydrogen projects. The wave of investment is expected to target China's goal of becoming carbon-neutral by 2060.

Forward Looking Information Warning
This press release contains forward-looking information within the meaning of applicable securities legislation, which reflect management's current expectations and projections regarding future events. Particularly, statements regarding the company's expectations of future results, performance, achievements, prospects or opportunities or the markets in which we operate is forward-looking information, including without limitation, the ability of Loop Energy Shanghai to accelerate the commercialization and market expansion of our products in China, the successful operation of the Nanjing bus fleet, the expected launch and operational date of our manufacturing facility in Shanghai, the expected timing of commercialization of our fuel cell technology and China's expected pursuit of its' national hydrogen plan. Forward-looking information is based on a number of assumptions (including without limitation assumptions with respect the current and future performance of the company's products, growth in demand for the company's products both inside and outside of China, the company's ability to execute on its strategy and achieve its targets; and is subject to a number of risks and uncertainties, many of which are beyond the company's control and could cause actual results and events to vary materially from those that are disclosed, or implied, by such forward‐looking information. Such risks and uncertainties include, but are not limited to, the realization of electrification of transportation, the elimination of diesel fuel and ongoing government support of such developments, the expected growth in demand for fuel cells for the commercial transportation market, our ability to obtain future patent grants for our proprietary technology and the effectiveness of current and future patents in protecting our technology and the factors discussed under "Risk Factors" in the Company's Annual Information Form dated March 23, 2022. Loop disclaims any obligation to update these forward-looking statements. 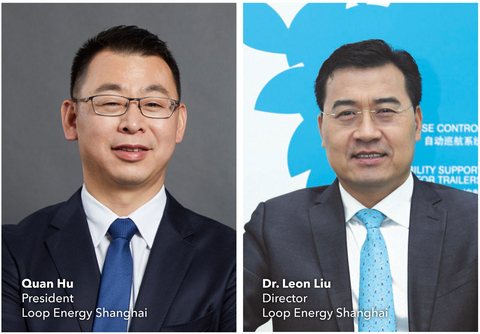