DUBAI, United Arab Emirates--(BUSINESS WIRE)--A new dawn for peace in the Middle East dominated talks at the World Government Summit 2022 (WGS2022) today as the UAE president’s diplomatic adviser stressed the need to work with all countries in the region.

The UAE will work with all nations to promote prosperity and stability in the Middle East, His Excellency Dr. Anwar bin Mohammed Gargash, Diplomatic Advisor to the UAE President His Highness Sheikh Khalifa bin Zayed Al Nahyan, said.

“We are reaching out to friends and also adversaries and rebuilding bridges. We are not going to agree with everything they want to do,” he said on the first day of WGS2022.

Kristalina Georgieva, Managing Director of the International Monetary Fund (IMF), said Russia has not been suspended from the IMF.

Speaking at a plenary session at WGS 2022, she said: “The board can only suspend them if the membership of the Fund says we do not recognise this particular government anymore. There has to be dialogue.”

Umm Al Quwain launched the Sustainable Blue Economy Strategy, which aims to contribute 40% to the emirate’s GDP by 2031. This includes meeting a net-zero emissions target by 2031 and dedicate a fifth of Umm Al Quwain’s land area to nature reserves.

His Highness Sheikh Majid bin Saud bin Rashid Al Mualla, Chairman of the Umm Al Quwain Department of Tourism and Archaeology, announced the intention to establish the Umm Al Quwain Centre for Entrepreneurship and the Blue Economy that will deliver eight transformative projects.

Umm Al Quiwain has seen GDP rise by 34% in the past decade, foreign direct investment nearly double in eight years, and exports increase threefold since 2017.

With “astronomical” demand for flights, Emirates President Sir Tim Clark promised renovation of the airline’s iconic fleet of A380s, which have produced 80% of the Dubai carrier’s profits. “We’re going to refurbish them, refresh them, put more innovation into them, and they’re going to be something really special,” he said. 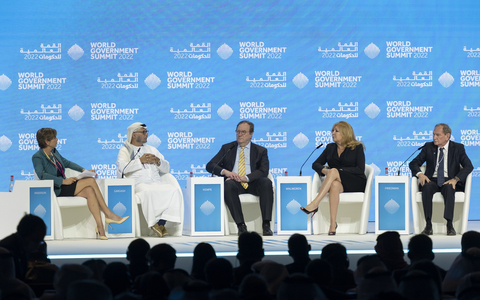