Gillette Gaming Alliance members will compete in two-day tournament for cash prize of $25,000

BOSTON--(BUSINESS WIRE)--Gillette (NYSE: PG), the world’s largest male grooming company, announced today its latest initiative in gaming and esports: The Gillette Cup. The two-day tournament, which kicks off on February 3, will be hosted by esports hosts and commentators including Alan “Bricey” Brice and Iain Chambers. Additionally, the Gillette Cup will feature members of the Gillette Gaming Alliance as they compete in the Gillette Bed Battles, a map built in Fortnite Creative, alongside members of the global Fortnite community. The Gillette Gaming Alliance, now in its fourth year, is a team of global streamers selected to represent the brand and create content for audiences worldwide.

Gillette, a pioneer for non-gaming brands in the esports industry, launched the custom-built Gillette Bed Battles map in November 2021. In its first two weeks, the map had over 250,000 plays, solidifying it as a Top Growing Combat Map in Fortnite’s Creative mode. Gillette Gaming Alliance members across the globe were some of the first to enjoy and play the game, including Dr. Lupo (North America), Elded (Mexico), Jolavanille (France), and Juansguarnizo (Mexico), and Ocastrin (Brazil). Gillette Bed Battles is currently a solo format game and will be played in a Duos format for the Gillette Cup. It will return to a solo format once the tournament concludes.

“Gillette has been one of the world’s most recognized supporters of sport and athletes throughout our 120-year history, and we’ve taken this heritage into the exciting and fast-growing world of esports in recent years,” explains Gary Coombe, CEO, Gillette. “With the Gillette Cup, we’re expanding this presence in the esports community and providing fans new experiences and the access they truly value.”

Day One of the Gillette Cup will focus on Regionals, where eight “duo” teams will play for each of the six regions participating – France, Germany, Italy, Russia, Spain, and the UK – totaling 96 players overall. All teams will play three rounds of Bed Battles on a ranked point system, with the top two teams from each region advancing to the Semi-Finals. Day Two will host the Semi-Finals and Finals, where the 12 advancing teams will be divided into two groups of six to play one round. The top three duos from each group (six duos in total) will advance to the Finals for a three-round finale. The last duo standing will be named the Gillette Cup Winner and split a $25,000 cash prize.

The Gillette Gaming Alliance members who will battle it out against fellow fans, followers, and members of the esports and gaming community to become the first-ever Gillette Cup Winner include:

Tune in to watch at Twitch.tv/Gillette as the Gillette Gaming Alliance members kick off the Gillette Cup, defend their bed, perfect their strategy, and determine who will become the very first Gillette Cup Winner.

Additionally, Gillette recently launched its own Gaming channel, @GilletteGaming on TikTok, which features highlights from Gillette Gaming Alliance members and their streams. Be sure to check it out!

*This is an independently created Fortnite Creative experience and is not sponsored, endorsed, or administered by Epic Games, Inc.

For more than 120 years, Gillette has delivered precision technology and unrivalled product performance – improving the lives of over 800 million consumers around the world. From shaving and body grooming, to skin care and sweat protection, Gillette offers a wide variety of products including razors, shave gel (gels, foams and creams), skin care, after shaves, antiperspirants, deodorants and body wash. For more information and the latest news on Gillette, visit www.gillette.com. To see our full selection of products, visit www.gillette.com. Follow Gillette on Twitter, Facebook and Instagram. 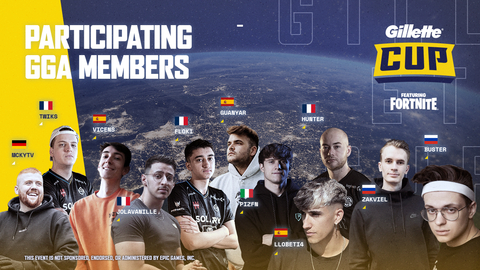