Peruvian Nativity Scene Featured for Christmas 2021 in the Vatican

Peru’s rich cultural heritage is globally admired thanks to a Nativity Scene comprising more than 30 life-sized figurines created by artisans from Huancavelica.

LIMA, Peru--(BUSINESS WIRE)--The traditional manger scene created by the Chopcca Nation from the Huancavelica region, located in the Peruvian heartland, is being shown at St. Peter’s Square in Vatican City as of December 10th, according to PROMPERU.

For 45 days, devotees and tourists from the world over will be able to admire this scene, which includes more than 30 figures made by five expert artisans from Huancavelica, using fiberglass, ceramic, and maguey wood, among other materials.

“This is an activity with a huge spiritual transcendence that confirms the good relationship with the Vatican State in the context of our independence’s 200th anniversary. This exhibition will also create interest in Peruvian nations. We are confident that the world will pay more attention to Peruvian cultural heritage and our artisans’ talent,” said Amora Carbajal, Executive Director of PROMPERU.

One of the main features of this Nativity Scene is its colorfulness, prominently displayed in the figures decorated with the Chopcca Nation’s typical costumes, which were declared Peruvian Intangible Cultural Heritage in 2014 due to their uniqueness, representativeness, and importance within indigenous culture.

Another unique trait of this Nativity Scene is the way the child is represented. Jesus has the look of a “Hilipuska” child, wrapped in a typical Huancavelican blanket. Likewise, the Wise Men’s gifts reflect part of Peru’s wealth, its agricultural products, superfoods that the South American country sells to the world.

Since this is a rural Nativity Scene, some native Peruvian animals have been included in the representation, such as llamas, condors, vizcachas, Andean flamingos, and alpacas, among others. The stage design also alludes to Huancavelican landscapes and architecture, using typical local materials.

The celebration of Christmas has a deep-rooted tradition in Peruvian art. This religious festivity, introduced during Viceroyalty times, has been preserved throughout the country’s history in countless representation forms and iconographic variants, figurines being one of them. 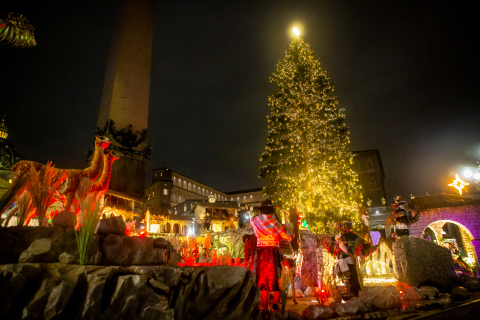