TOKYO--(BUSINESS WIRE)--London, New York, Tokyo, Paris and Singapore once again emerged in that order as the world’s most comprehensively attractive cities in the Global Power City Index (GPCI) 2021 report. This report is published by The Mori Memorial Foundation’s Institute for Urban Strategies, a research body established by Mori Building, a leading urban developer in Tokyo. The GPCI-2021 did not show any significant changes in the top cities' rank, but the citywide lockdowns, travel restrictions, behavioral restrictions, and changes in work styles associated with the COVID-19 epidemic since early 2020 affected various indicators. This resulted in a marked impact on the dynamics of target cities.

Since 2008, the annual GPCI report has ranked 40 or more major cities in terms of their “magnetism” - their overall power to attract creative individuals and enterprises from around the world. Cities are rated on the basis of 70 indicators in six functions: Economy, R&D, Cultural Interaction, Livability, Environment, and Accessibility. In an effort to reflect changes in the conditions affecting global cities, the GPCI continuously fine-tunes its indicators and data-collection methods.

In the GPCI-2021, there are 19 indicators that are assumed to have been affected by COVID-19. (The details will be described later.) Each impact can be divided into four categories: Travel Restrictions, Business Activity, Working Style, and Urban Environment. In terms of Travel Restrictions, many cities experienced a decline in international air travel and passenger traffic, and cities with strong international networks were seriously affected in Accessibility and Cultural Interaction. In addition, economic stagnation had a negative impact on Business activities in many cities. On the other hand, COVID-19 has brought about some positive changes: improvements in working style and in the urban environment. In many of the target cities, the number of working hours decreased and workstyle flexibility appeared to improve. (The questionnaire evaluation of work flexibility improved.)

Although London maintained its #1 position in the overall ranking, the city was significantly affected by COVID-19. Its Accessibility ranking fell from last year, as did its Economy score due to weaker “Total Employment.” The fact that all other European cities increased their Economy scores suggests that the UK’s exit from the EU is beginning to have an impact, allowing other European cities to start catching up to London. The city maintained its unbroken status as 1st in Cultural Interaction since the start of the GPCI, so the question going forward is can London use its strength in this area to grow its overall competitiveness despite the pandemic?

New York further improved its scores in Economy and R&D, both areas it has led for five consecutive years. However, similarly to London, New York also struggled in Accessibility. Also, in Livability, the city dropped seven places to 40th and there was a notable drop in employment indicators such as “Total Unemployment Rate” and “Workstyle Flexibility,” further exacerbating longstanding weaknesses. In terms of Environment, New York moved up in the rankings due to its strength in “Air Quality” and a higher score in “Satisfaction with Urban Cleanliness.”

Tokyo improved its ranking in Livability from 12th to 9th, making it into the top 10 in four of the five main areas except for Environment. Significant improvement in “Workstyle Flexibility,” up from 41st last year to 2nd this year, greatly boosted Tokyo’s overall score. While Tokyo has continued to score highly in “Number of Retail Shops” (3rd) and “Number of Restaurants” (4th), it received a low score in “ICT Readiness,” an area in which it must improve in order to rise up in the Livability ranking. Tokyo remained in 4th in Economy, but the gaps between Hong Kong (#5) and Zurich (#6) were almost the same as before. To maintain its current standing, Tokyo will have to continue working on its competitiveness.

Paris, one of the fastest rising cities this year, improved in four areas: Economy (13th), R&D (9th), Cultural Interaction (2nd) and Livability (2nd). In Economy, where Paris has been steadily rising since GPCI-2018, “Workplace Enrichment” the city moved up to 5th and in “GDP per Capita” it rose to 3rd. Under Cultural Interaction, its “Tourist Attractions” rating climbed to 2nd. In Livability, it was 1st in “Number of Retail Shops,” and scored highly in many other related indicators. With the Paris Olympic Games targeted to be a sustainable event, Paris hopes to improve in Environment, which dropped this time.

Singapore achieved only half of its usual scores for “Number of Foreign Visitors” in Cultural Interaction and “Number of Air Passengers” in Accessibility, mirroring London in terms of a noticeably negative impact due to COVID-19. But despite stagnated economic activities due to the pandemic, Singapore also benefitted from some positive changes, such as a much better “Air Quality” score in Environment, in fact making the highest improvement among all 48 cities.

The COVID-19 pandemic brought about positive changes, especially in “Working Style” and “Urban Environment.” The impact is particularly evident in “Variety of Workplace Options,” where more than half of the cities experienced increases in the number of co-working facilities. Most cities also saw decreases in working hours as measured in “Total Working Hours,” as well as higher scores in “Workstyle Flexibility” according to a survey on workstyle flexibility. “Air Quality,” which measures PM2.5 concentrations, improved in approximately 80% of the cities.

Meanwhile, the most significant negative impact was in “Travel Restriction,” where “Number of Foreign Visitors” and “Number of Air Passengers” ratings both plummeted, leading to many cultural-event cancellations and hotel closures. In terms of “Business Activity,” many companies in GPCI cities experienced declines in sales and numbers of start-ups.

In Tokyo and Madrid, scores rose due to improvements in work environments, including “Total Working Hours” and “Workstyle Flexibility.” Tokyo's increased score in “Number of Cultural Events” is largely attributed to hosting the Tokyo Olympic Games.

Singapore, Hong Kong and London, which traditionally have higher percentages of international travelers than domestic travelers, were most affected in terms of “Travel Restriction,” especially decreases in “Number of Air Passengers.” New York and Berlin were negatively affected in “Working Style” as the pandemic raised unemployment rates and lowered scores in “Total Unemployment Rate.” Singapore saw the biggest improvement in air quality, which boosted its “Urban Environment” score. London and Paris were negatively affected by declines in their scores for “World's Top 500 Companies in Business Activity.”

Brexit and Changes in European Cities

Since 2016, when the United Kingdom chose to leave the European Union in a referendum, follow-on changes have continued to occur in the European business environment and economy. We revisited the post-referendum results over the last five years to quantify the changes in Economy in London and the next top-five European cities since GPCI-2017. Changes over the five years show that other European cities are catching to London, raising questions about London's ability to continue dominating its European rivals in Economy.

The full press release can be viewed at the following link:
https://mori-m-foundation.or.jp/pdf/GPCI2021_release_en.pdf 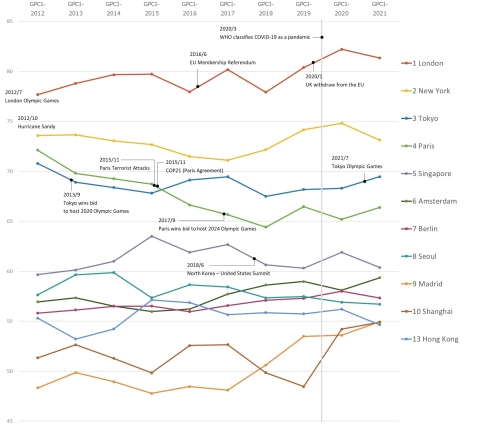 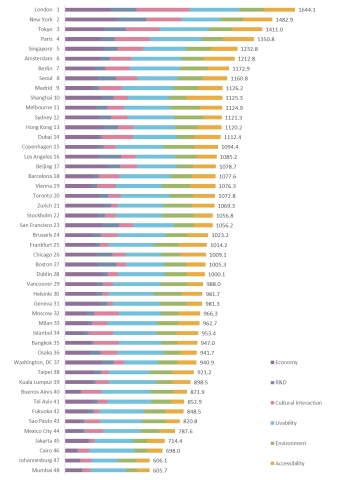