Impossible Foods’ flagship product goes on sale this week in about 200 grocery stores in Hong Kong and Singapore
Consumers can get Impossible™ Beef Made from Plants in nearly 100 outlets of PARKnSHOP in Hong Kong, and in Singapore nearly 100 outlets of FairPrice and online retailer RedMart
In the United States, Impossible Foods has expanded its retail footprint more than 70X in the past six months as millions of Americans pick Impossible’s award-winning, plant-based meat instead of ground beef from cows

HONG KONG--(BUSINESS WIRE)--Impossible Foods is making its award-winning, plant-based meat available to home chefs in Asia in nearly 200 grocery stores across Hong Kong and Singapore -- the first time Impossible Beef Made From Plants has been available for home chefs outside of the United States.

Named top plant-based burger by the New York Times and a favorite of Cook’s Illustrated, Impossible Beef (known as Impossible™ Burger in North America) rivals ground beef from cows for taste. It is kosher, halal and gluten-free certified. It’s nutritious and versatile in all ground beef recipes, including stews, chili, sauces, braises, minces, meatballs, meat pies or any other beefy menu item.

Impossible Beef debuted in Asia’s top restaurants two years ago, when fans lined up to try the Silicon Valley phenomenon dubbed a “triumph of food engineering.” Impossible Beef is now served in the Hong Kong and Singapore restaurants of world-class chefs such as May Chow, Uwe Opencensky, Gordon Ramsay, Ricky Leung, Adam Penney and Andrei Soen.

“The world’s most respected chefs consistently tell us that the Impossible Burger blows them away. And we can’t wait for Hong Kong and Singapore’s home chefs to experience the same magic in their own kitchens -- whether using Impossible Beef in their traditional family favorites or inventing new recipes that go viral,” said Impossible Foods’ CEO and Founder Dr. Patrick O. Brown.

Impossible Beef is the flagship product from Impossible Foods, Inc. Magazine’s company of the year and one of Time Magazine’s 50 Genius companies. The company’s mission is to halt biodiversity collapse and reverse global warming by eliminating the need for animal agriculture, which has led our planet to the brink of environmental collapse.

Impossible’s flagship product made its worldwide grocery store debut in 2019, when it immediately rocketed to the No. 1 item sold at some of America’s favorite grocery stores, outselling all ground beef from cows at many outlets. At one supermarket in Southern California, Impossible Burger outsold all brands of ground beef from cows -- and it outsold the next most popular single product by 6X.

Impossible Foods is one of America’s fastest-growing brands and the leading driver of growth in the overall plant-based food category. Nine out of 10 people who buy Impossible Burger regularly eat animal-derived foods.

But COVID-19 dramatically altered the shopping and cooking habits of consumers worldwide, with more residents dining at home. Home chefs in Singapore and Hong Kong have flooded social media with photos and recipes of dishes, inspiring friends and relatives and driving up demand in brick-and-mortar and grocery stores.

Impossible Foods joined the recipe-sharing frenzy, launching its first cookbook this year. Following its initial release, the cookbook was named a #1 Best Seller in Amazon's Burger & Sandwich Recipes category, as well as #1 New Release in Amazon’s Sustainable Living and Vegan Cooking categories. Impossible™: The Cookbook (Chronicle Books) is now available for sale in Asia, through online sellers such as Kinokuniya, Amazon.sg, Amazon.com, and Book Depository..

Impossible™: The Cookbook highlights the convenience and versatility of Impossible Beef -- and it shows how simply switching to plant-based meat can transform the global food system. In addition, the book includes recipes for savory starters such as Vietnamese Imperial Rolls, Pan-Fried Chive Dumplings and Jamaican Patties with Calypso Sauce -- as well as center-of-the-plate mains such as Thai Laab with Fresh Herbs, Turkish-Spiced Sandwiches with Garlic Sauce and Szechuan Mapo Tofu. The cookbook includes an entire chapter dedicated to burgers and a complete section on beverage pairings.

The cookbook features 40 recipes from some of the pioneering chefs and personalities who introduced the product to the world, including May Chow (Little Bao, Hong Kong), Andrei Soen (Park Bench Deli, Singapore), Ricky Leung (EMPRESS, Singapore), and Que Vinh Dang (NHAU, Hong Kong).

Impossible Foods was Inc. Magazine’s company of the year and one of Time Magazine’s 50 Genius companies. The flagship product, Impossible Burger, was named top plant-based burger by the New York Times and received the Food and Beverage (FABI) Award from the National Restaurant Association. 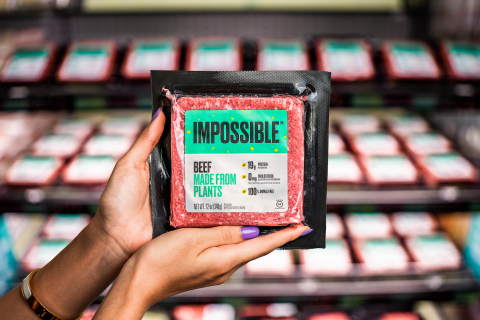 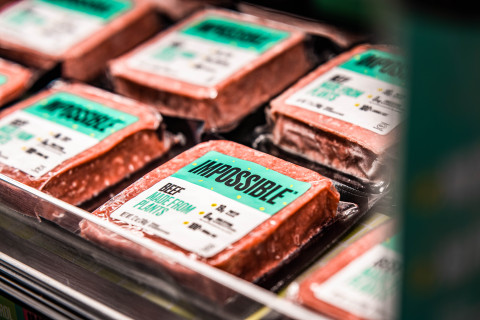