PISCATAWAY, N.J.--(BUSINESS WIRE)--Solidia Technologies® CEO Tom Schuler shared the possibility of turning Solidia Concrete into a carbon sink for the planet during his TED Talk at TED and Future Stewards’ Global Countdown Launch. Tom was invited to "The Countdown," a call to action on climate change, to explain how cement and concrete contribute to the global carbon challenge and the potential impact of new production technologies for Solidia Cement™ and Solidia Concrete™.

"To address global warming, innovation in both cement production and carbon utilization are absolutely essential," said Tom. "Our new technology for ready-mix concrete is currently being tested for infrastructure applications. And we have already pushed our research beyond that with a technology that enables concrete to become a carbon sink; that means we consume more carbon dioxide (CO2) than we emit during production."

Outlining the issue, he explained how concrete contributes to the global carbon challenge because it is made with cement. "For every ton of cement produced, about a ton of CO2 is released into the atmosphere. As a result, the cement industry is the second largest industrial emitter of CO2, responsible for about eight percent of global emissions."

By changing the chemistry of cement, Solidia both lowers emissions at the cement plant and consumes CO2 in the production of concrete. "Our cement reacts with CO2 instead of water. During curing, the chemical reaction with our cement breaks apart the CO2 molecules and captures the carbon to make limestone that glues the concrete together.”

For production of precast concrete that is cured in kilns, he explained: “When you combine the emissions reduction during cement production with CO2 consumption during curing, we reduce cement’s carbon footprint by up to 70%.”

Describing the different carbon delivery system developed for ready-mix, he added: "Since we can’t use CO2 gas at a construction site, we had to introduce it into our concrete in solid or liquid form. We are partnering with companies that are turning waste CO2 into a family of chemicals, like oxalic or even citric acid – the same one in orange juice. We use these acids to react with our cement and pack in as much as four times more carbon, resulting in carbon-negative concrete.”

Citing the potential impact, Tom explained: “That means that, in just a few hours, one kilometer of road could permanently consume the same amount of CO2 that nearly 100,000 trees absorb in one year. Thanks to chemistry and waste CO2, we have the potential to transform concrete – the second most utilized material on the planet – into a carbon sink for the planet.”

TED is a nonprofit organization devoted to Ideas Worth Spreading, often in the form of short talks delivered by leading thinkers and doers. Many of these talks are given at TED conferences, intimate TED Salons and thousands of independently organized TEDx events around the world. Videos of these talks are made available, free, on TED.com and other platforms. Audio versions of TED Talks are published to TED Talks Daily, available on all podcast platforms. 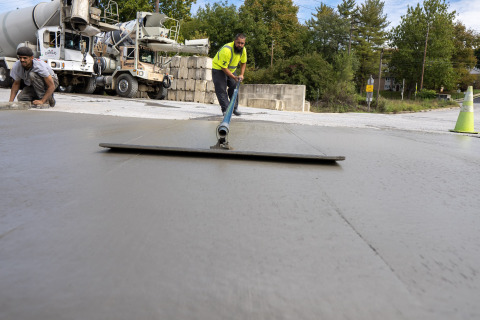 Solidia’s new applications can reduce the carbon footprint of ready-mix concrete by reducing the emissions of cement and consuming CO2 (Photo: Business Wire)