Kochi Prefecture is known as the “Manga Kingdom” - the birthplace of many artists who create manga, an important Japanese cultural resource. Creative company NAKED Inc. is proposing a new kind of contemporary art, transforming manga from something to read into something to experience, through their new project “NAKED Manga Mappin’!” which features works by manga artists from Kochi and stories that take place in the prefecture. Starting Friday, March 6, 2020, the project will be on display at the 2F Departure Lobby at Kochi Ryoma Airport.

“NAKED Manga Mappin’!” is composed of two works: “NAKED BIG COMIC” and “Onomatopoeia.” The exhibit starts with “NAKED BIG COMIC.” With the turn of each page, a new story begins; the projection changes with every turn and the floating pages give the viewer a glimpse into a number of new tales. Visitors can also learn about the sound expressions unique to manga through the installation “Onomatopoeia”. Sounds we hear in our daily lives, like clapping, are expressed visually, transforming everyday occurrences into exciting manga-like experiences.

We hope this exhibit motivates visitors to visit the Kochi Tourist Information Center “Tosa Terrace,” where there is a related collaborative exhibit with NAKED Inc., or the Yokoyama Memorial Manga Museum, places that provide immersive experiences of the spirit of Manga Kingdom Tosa.

The Agency for Cultural Affairs is hosting the “Japan Media Arts Distributed Museum” that will be deployed in 10 Japanese airports as part of a new project called the “Japanese cultural media arts dissemination initiative in airports and other institutions.”

The artists and creators featured in this exhibition capture the cultural resources borne out of various local cultures through fresh perspectives in places like airports, which serve as gateways to these regions. By showcasing the works of media arts, we invite visitors to explore the true spirit of these cultures through their travels.

Theme: Manga Kingdom Tosa
Exhibition: “NAKED BIG COMIC”
“NAKED BIG COMIC” transforms manga from something to read to something to experience with every turn of a page. Through this exhibit, viewers can experience manga with deep connections to Kochi Prefecture; the works featured in the exhibit -- YOKOYAMA Ryuichi’s “Fuku-chan”, UEYAMA Tochi’s “Cooking Papa”, YAMASAKI Juzo and KITAMI Kenichi’s “Tsuribaka Nisshi”, TAKEDA Tetsuya and KOYAMA Yu’s “Hallo! Ryoma”, KIBAYASHI Shin and SATO Fumiya’s “Kindaichi Case Files” -- either take place in Kochi, were created by manga artists from the prefecture, or were featured works at the All-Japan Manga Artists Conference in Manga Kingdom Tosa.

Exhibition: “Onomatopoeia”
Onomatopoeia is a tool used to express the state of mind of or situations in which manga characters find themselves with a sense of reality. Onomatopoeia captures sounds and visually expresses them in a way that is specific to the subtle sensitivities of the Japanese people. For example, there are many onomatopoeic expressions that exist for different types of rain in Japanese.

The onomatopoeia “shiin” is used to express silence, and is said to have been coined by manga artist TEZUKA Osamu. It is now commonly used expression in our daily communication. Clearly, onomatopoeia rooted in manga has had an immeasurable impact on Japanese culture and communication styles.

This exhibition captures movements of the visitor through onomatopoeia, and is installed in an existing booth called “Harimaya Bridge” in the airport, inspired by the tourist destination in Kochi. When a viewer stomps on the ground, the movement is expressed with “don”; when hands are clapped, “pan”. The artwork is created to react to each person’s unique movement, and so the visual representation changes with the intensity and noises made by those who enter the space.

Creative Producer: NAKED Inc.
NAKED Inc. is a creative company founded in 1997, with a team comprised of directors, designers, and writers and MURAMATSU Ryotaro. With “CoreCreative” “Total Creation” and “Borderless Creativity” as their mottos, the team creates art across many platforms and genres, such as films, musicvideos, TV programs, advertisements, immersive experiences, regionalrevitalization efforts, and educational programs.

More recent works include “OCEAN BY NAKED” ; “Water Tree” , a new monument at the Izumi no Hiroba in Osaka; as well as seasonal installations at Tokyo Tower and Maxell Aqua Park in Shinagawa. In 2020, their immersive floral exhibition “FLOWERS BY NAKED 2020” took place for the fifth time at Nihonbashi Mitsui Hall between Thursday, January 30 and Sunday, March 1.

Kochi Tourist Information Center “Tosa Terrace”
The tourist information center is located close to the south exit of JR Kochi Station. Visitors can learn about tourist destinations, seasonal foods, and specialty products of Kochi Prefecture. Projection mapping artwork created by NAKED Inc., based on the theme of “Ryomaden Bakumatsu Heroes Pavilion” will be displayed here starting Thursday, March 20, 2020. Collect the two-dimensional bar code available at the Kochi Ryoma Airport, scan this code using a device located in the Tosa Terrace “Ryomaden Bakumatsu Heroes Pavilion”, and you will be able to view a special performance of the animated series Hallo! Ryoma.

Yokoyama Memorial Manga Museum
YOKOYAMA Ryuichi, one of the manga artist legends, was born in Kochi City in 1909. His seminal work Fuku-chan has been loved for a long time before and after WWII, but he also created many other manga comics, picture books, oil paintings, ink paintings, and handmade animations. As a cultural facility in Kochi, this institution showcases various manga comics and resources focusing on Mr. YOKOYAMA’s artwork. Fuku-chan is also featured in the exhibition at Kochi Ryoma Airport. 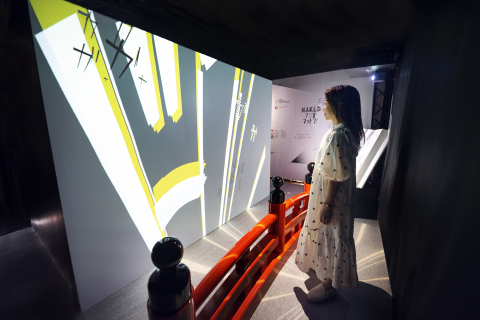