Artwork by David Oreilly – a Video Game Inspired by “Dazaifu”, Cultural Hub Connecting Japan with the Rest of East Asia – Currently Being Showcased at Fukuoka Airport from Sunday, February 9

With Dazaifu as its theme, Fukuoka Airport is exhibiting a work by globally-acclaimed Irish artist David OReilly, Award of Distinction recipient at Ars Electronica, one of the world’s largest media art festivals.

Dazaifu, founded over 1,300 years ago, was an international city that traded not only across central Kyushu but all of East Asia, making it such an important hub of ancient Japan that it was called “the western capital”. In recognition of this history and cultural value of related landmarks, the Agency for Cultural Affairs chose it as a cultural and traditional heritage site in April 2015.

The artwork’s motif is Mount Homan, one of these important landmarks that tells Dazaifu’s story as an international city accepting new cultures and transforming with the times. Mount Homan is revered as a sacred mountain where the gods descended, a protector of Dazaifu where national rituals have been passed down, and a holy site for Shugendo, Japanese mountain asceticism. Its various roles also included giving shape to farming culture and, during the Middle Ages, serving as a military post. Now with that unfolding history recognized as a heritage site, it also serves as a lens to view the multifaceted history of Dazaifu and its linkage to the rest of Japan, East Asia, and even the world.

David OReilly’s artwork is a game that looks at the mountain as a life itself. Beginning with the words, “You are Mountain. You are God.”, it provokes the player to ponder the nature of a mountain, of our history, and of life, as something symbiotic to be both revered and used.

We hope this piece sparks visitors’ interest not only in Mount Homan but all of Dazaifu and its other historical landmarks. Right now, Mount Homan is Kyushu’s most-climbed mountain, so we invite you to hike it as a chance to encounter Japan’s values, spirituality, and sense of beauty.

The Agency for Cultural Affairs is hosting the “Japan Media Arts Distributed Museum” that will be deployed in 10 Japanese airports sequentially as part of a new project called the “Japanese cultural media arts dissemination initiative in airports and other institutions.”

The artists and creators featured in this exhibition capture the cultural resources borne out of various local cultures through fresh perspectives in places like airports, which serve as gateways to these regions. By showcasing the works of media arts, we invite visitors to explore the true spirit of these cultures throughout their travels.

“Mountain” is a simulation video game developed by David OReilly, featuring little interactivity from the player. Upon starting the game, the player is asked to draw responses to a series of questions, described by OReilly as "more psychologically invasive than anything Facebook wants to know about you."

The game uses that input to generate a model of a mountain, floating in space, surrounded by a small sphere of atmosphere. At this point, the game lacks significant interactivity; while the player can rotate the view around the mountain and zoom in and out, they cannot affect the mountain in any way. The game is set to be run in the background as the player does other activities on their computer.

Over the course of the game, the mountain slowly rotates as accelerated time progresses through day and night cycles and through seasonal changes: the player will see snow form and melt on the mountain, and plants and trees grow and wither out. Randomly, the mountain may be hit by everyday objects which then become embedded in the mountain indefinitely. The mountain periodically offers its thoughts to the player as the game progresses. After around fifty hours while the game has been running, the mountain meets its fate when it crashes into a passing giant star, ending the game, at which point the player can start the game over with a new mountain.

This work by David OReilly uses the format of a game to ask ontological questions.

What is a mountain? Even in academic fields like geology, this seemingly simple concept eludes definition. On the scale of millions of years, it is constantly in motion, changed by the wind, rain, and other elements. The biota covering its surface are replaced over various lifespans, and over centuries, humans’ conceptions of mountains are ever in flux as well.

The famous sorites paradox asks, “If removing a single grain does not turn a heap into a non-heap, is a single remaining grain still a heap?” If a mountain is only a mountain because of a complex interaction of constituent parts, how does that differ from our lives?

This Strange, hands-on piece of art invites your imagination.

David OReilly is an artist working in design, animation and video games. Creator of the groundbreaking animated films “Please Say Something” and “The External World”, his film work has won numerous awards and been the subject of several retrospectives internationally. He has served as writer for the TV shows Adventure Time & South Park, and created the fictional video games in Spike Jonze's Academy Award winning film “Her”. In 2014 he released his first independent game “Mountain” and followed up with “Everything” in 2017. “Everything” won grand prizes at A MAZE & Ars Electronica and was featured as Game Of The Year by WIRED, Polygon, AV Club, The New Yorker and others. Its trailer became the first interactive project to qualify for an Academy Award.

Currently, their work focuses on concept design, community design, project design, and business development in the arts and sciences fields. They specialize in designing intangible structures that are essential to new value creation. 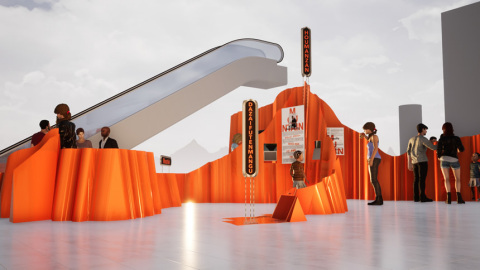