Bacardi Limited Paves the Way For A Good Spirited Future

HAMILTON, Bermuda--(BUSINESS WIRE)--Family-owned Bacardi Limited has been doing the right thing for its people, its community and the planet more than 158 years. Today, the company released its fiscal year 2019 Good Spirited Corporate Responsibility (CR) Report to provide open and transparent communications in how it’s championing commitments within its CR pillars of marketplace, people, environment, responsible sourcing, and philanthropy and community investment. From responsible drinking efforts, to driving a positive and diverse culture, to hurricane disaster relief and reducing the impact on natural resources, the Good Spirited Corporate Responsibility Report outlines progress in fiscal year 2019, alongside commitments for the future. This marks the 12th annual CR report issued by privately-held Bacardi Limited.

“Being family-owned for seven generations allows us to stay true to our values of being fearless to innovate, behaving like family to each other and our communities, and exhibiting founders mentality in always doing the right thing -- particularly towards making the world a more sustainable, safe and transparent place,” says Rick Wilson, Senior Vice President of Corporate Responsibility at Bacardi. “It’s extremely gratifying to see us achieve key milestones, in some cases ahead of time, and to continuously pursue new goals and set higher standards for the future.”

The report outlines the overall marketplace for spirits and addresses the responsibility Bacardi has in promoting responsible drinking practices and targeting our marketing only to legal age drinkers. With the evolution of digital marketing, the company has doubled down efforts to enforce safeguards to limit minors from seeing alcohol marketing online. Bacardi has achieved 79% compliance in establishing these safeguards with an aim to be 100% compliant by 2020. Bacardi has also been an early mover in the space of nutrition transparency, with the launch of a Bacardi nutrition website in key markets giving consumers more information about what they’re drinking including calories and allergens.

The vibrant, warm and entrepreneurial culture at Bacardi is reflected in the exceptional employee engagement with the global internal survey showing 89% of employees saying they are “proud to work for the company.” External perception of the company is also positive as Bacardi Limited was named among the most reputable companies in the world as part of the annual Global RepTrak® 100 list compiled by the Reputation Institute (RI) and published in Forbes. Ranked at #87, Bacardi Limited climbed two spots and has made the annual global list seven consecutive times.

Bacardi believes in the inherent value that can be created when you bring together a diverse and inclusive community and workplace. Helping female talent at Bacardi, and within our community, is among the many causes championed by the company through its Global Reflections program. The company has made considerable headway with women making up 44% of North America and 40% of Europe – which represent the two largest regions of the business. In addition, 37% of the leadership positions in the company were held by women in fiscal year 2019 and the company continues to work towards narrowing the gender gap.

Bacardi continues to push the boundaries with aspirations to be the world’s most environmentally responsible global spirits company. Finding a second life for all waste is a priority and the company’s production facilities have achieved 99.6% of waste diversion. Despite increases in production, the company has been able to reduce greenhouse gas emissions from operations by 20% and cut water consumption by almost 10% through efficiencies in assets utilization. It is also committed to the long-term sustainability and responsible sourcing of sugarcane, agave, wheat, botanicals, and other natural resources needed to craft its world-class premium products. Already 98.4% of the sugarcane-derived products used in BACARDÍ® rums are sourced from suppliers certified by Bonsucro, with the goal of reaching 100% by the end of fiscal year 2020, three years ahead of initial targets. The company also achieved ECOCERT certification for 50% of botanicals for BOMBAY SAPPHIRE® gin with a goal to certify 100% of the botanicals in the coming year. With an eye for the future and always pushing to do greater good, Bacardi has defined a long-term plan to reduce greenhouse gas emissions by 20% and water consumption by 25% by fiscal year 2024.

Going beyond the company to care for the community is part of the DNA at Bacardi since its inception in 1862. Bacardi, together with Mercy Corp, continues to support the long-term recovery efforts in Puerto Rico, where BACARDÍ rum is produced, after devastation from Hurricanes Maria and Irma in 2017, providing habitat rehabilitation, financial grants, business training, and marketing support to 243 businesses on the island.

Founded more than 158 years ago, in Santiago de Cuba on February 4, 1862, family-owned Bacardi currently employs more than 7,000, operates more than 20 production facilities, including bottling, distilling and manufacturing sites in 11 countries, and sells its brands in more than 170 countries. Bacardi Limited refers to the Bacardi group of companies, including Bacardi International Limited. Visit www.bacardilimited.com or follow us on Instagram, LinkedIn and Twitter. 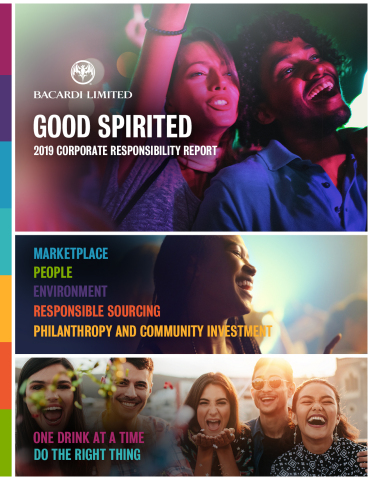