Company Founder David Hall to Continue as Chairman of the Board

Over the past three years, Gopalan has worked closely with Hall to develop the company’s technological roadmap and strategic vision. Gopalan is recognized across the industry as a thought leader in business as well as in technology. Recently, Gopalan became more active as a spokesman for the company, expertly explaining the benefits and the workings of lidar to audiences around the world. It is the policy of Velodyne to promote from within the company and Gopalan was a natural choice, having proved himself in 2019.

Gopalan and the Velodyne team look forward to building on the company’s growth trajectory. Due to the breadth and versatility of the Velodyne lidar portfolio, the company continues to make revolutionary contributions to the ever-expanding autonomous industry. Velodyne is a recognized leader in a wide range of markets including automotive, mapping, on-demand mobility, robotics, security, unmanned aerial vehicles (UAV) and more.

Under Gopalan’s leadership alongside Hall, Velodyne brought to market a series of breakthrough lidar products, including the Alpha Prime™, Velarray™, VelaDome™ and a new game-changing lidar sensor, soon to be used for powerful Advanced Driver Assistance Systems (ADAS). Due to its low cost, this sensor will advance automotive safety for the everyday car owner. At CES 2020, Velodyne will unveil the new lidar sensor and Gopalan will discuss his vision for the company at a press conference in the Velodyne booth #7520 on Tuesday, January 7, at 11:00 a.m. PST.

David Hall invented groundbreaking 3D lidar sensor technology in 2005 which set the stage for revolutionizing the automobile industry and was the foundation for Velodyne’s market leadership. The idea of leveraging lidar technology for autonomous driving came to Hall while participating in the DARPA Grand Challenge for autonomous vehicles. Holding more than 30 U.S. patents, Hall is a technology visionary and serial inventor covering a variety of applications, including lidar, audio and marine. The Intellectual Property Owners Education Foundation presented Hall with its 2018 Inventor of the Year Award.

“Anand Gopalan and I have worked side-by-side on Velodyne’s technology roadmap. He is the right executive to lead Velodyne in its next growth phase,” said Hall. “His finger is on the pulse of customer and market needs while possessing the technical brilliance and leadership skills to innovate and deliver. As Chairman, Anand has my full support while I continue to provide vision, strategize and invent.”

“David Hall is more than the founder of Velodyne, he is also the founder of our industry. I am grateful for the trust he has placed in me and excited to lead a company with such a deep history in innovation as Velodyne. We are the forefront of our market, ready to drive the age of autonomy. Velodyne is bringing improved mobility and safety through versatility, responsiveness and agility,” said Gopalan. 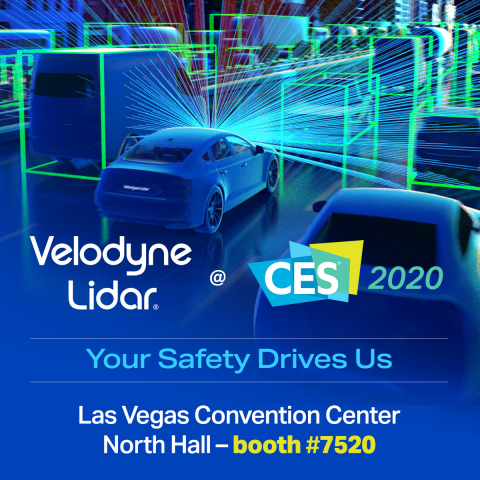 At CES 2020, Velodyne Lidar will unveil a new game-changing lidar sensor and new CEO Anand Gopalan will discuss his vision for the company at a press conference in the Velodyne booth #7520 on Tuesday, January 7, at 11:00 a.m. PST. (Photo: Velodyne Lidar)