ABU DHABI, United Arab Emirates--(BUSINESS WIRE)--This week some of the world’s most respected Islamic scholars, joined by experts from governments, civil society groups and other faiths, will launch a new effort to build global peace, based on tolerance and religious freedom.

At the sixth Assembly of the Forum for Promoting Peace in Muslim Societies, in Abu Dhabi, Shaykh Abdullah bin Bayyah, President of the Forum, will inaugurate the charter of the “New Alliance of Virtue”. Its text will be revealed and signed by its first signatories.

The charter aims to elevate religious freedom, cooperation, and tolerance from mere possibilities to necessary ethical commitments and legal obligations, especially in relation to the protection of places of worship whose attacks have threatened freedom of religion in many parts of the world.

This initiative draws direct inspiration from the earliest traditions of Islam.

Its purpose was to defend the weak and the innocent against the rapaciousness of those more powerful.

The Prophet of Islam, Mohammad, and the first of the Rightly Guided Caliphs, Abu Bakr, were both present when the Alliance was formed, though it was before Mohammad’s prophethood. He later praised it, saying: “I was present in the house of Ibn Judan when an alliance was formed, and were I to have been called upon by it in Islam, I would have answered its call.”

Last February in Washington D.C., H.E. Shaykh Abdullah bin Bayyah, President of the Forum for Promoting Peace, led a panel of over 200 individuals from the three Abrahamic faiths and others, comprising religious leaders and senior politicians in creating the modern Alliance of Virtue between religions.

The charter of the New Alliance of Virtue follows the model of the original, on a global scale. It brings together those of good-will for the benefit of humanity, an effort across religions to enable its members to live side-by-side in peace and happiness.

The charter doesn’t aim to bridge theological differences, members will instead cooperate based on a common theology of God-given human dignity, seeking virtue for the benefit of all.

The Forum for Promoting Peace in Muslim Societies is led by Shaykh Abdullah bin Bayyah, under the patronage of His Highness Sheikh Abdullah bin Zayed Al Nahyan, Minister for Foreign Affairs and International Cooperation. The Forum mines the best global Islamic scholarly expertise for solutions to the challenge of securing global peace. The Forum seeks to extinguish the fire of extremism that has spread throughout the world, with violence driven by erroneous and ill-informed interpretations of Islam. Participants will discuss and devise ways to challenge the extremism and politicisation which causes immense division and suffering. 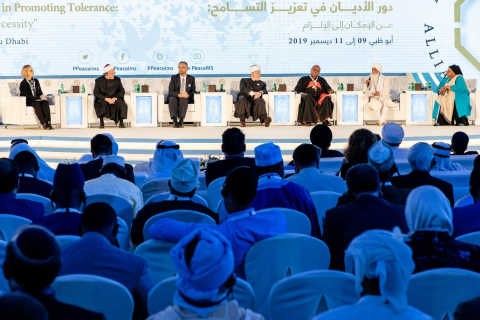