LONDON--(BUSINESS WIRE)--Rewired.GG, the €50m esports venture fund that invests in the global growth of esports, is delighted to announce that it has invested a further €14 million into Team Vitality, taking its total investment to date to €34 million. Today also marks the opening of the new multi-million euro Team Vitality headquarters in Paris, called V.Hive, which will be open to the public. In a world’s first for an esports team, the 10,700 sq ft V.Hive has more than 530 sq ft of store front in the bustling heart of Paris, and will offer engaging esports discoveries and experiences to anyone who walks in.

Team Vitality is one of the biggest esports teams in Europe and boasts some of the world’s top esports players and coaches. It is one of only ten European esports teams in the League of Legends European Championship franchise; and has recently won the 2019 World Championship for Rocket League, won the 7th season of the prestigious ECS tournament for Counter-Strike:Global Offensive and took 3rd place in the 2019 FIFA World Championship. It is also one of only a few esports teams with blue chip sponsors such as Orange, Renault, Red Bull and adidas.

Rewired.GG forecasts that esports will rival traditional sports such as soccer and basketball and will be a major investment category for institutional investors, funds and investment managers. By 2020 it is estimated that the monthly global esports audience size will be nearly 600 million*, equivalent to the current global audience of the English Premier League.

Today’s investment, along with the €20 million that Team Vitality received from Rewired.GG in November 2018, is thought to be the largest investment into a European esports team to date. The Team, which was founded in 2013 with €10,000, aims to be one of the world’s first $1 billion esports teams.

The funds will be used to support the continued growth of Team Vitality as the team pursues further expansion across India and China, where it is acquiring new players and launching a network of esports academies. Funds will also be used to acquire new players and to launch new lines of merchandise globally: as well as opening V.Hive, the team has also today launched its first Team Vitality brand of limited-edition adidas trainers.

As with any major sport, the business of esports is based on media rights, advertising, prize money, merchandise, sponsorship and partnerships. Revenue from these are growing exponentially.

In 2017 it was estimated that esports generated $655 million in annual revenue, including 38% from sponsorships and 14% from media rights. By 2022, it is forecast that media rights will reach 40% of total esports revenue and that total global esports monetization will reach $3bn.*

“In 2013 we started Team Vitality with €10,000. Today Team Vitality has built amazing teams that regularly win tournaments all over the world, and a strong brand that is backed by our amazing and dedicated fans and our premium sponsors. Receiving further backing by Rewired.GG after the initial investment of €20M in November 2018 is a testament to the strength not only of the team but also a comment on the growth of the sector as a whole. This investment will go towards continuing to turn Team Vitality into a global esports brand and we look forward to providing further updates on our future wins as we continue to pursue V for Victory.”

“Any industry with an audience that’s growing rapidly into hundreds of millions is hugely exciting and esports is no exception. We’ve seen the current esports trend many times before in the tech sector: first the number of eyeballs grows exponentially, and then full monetization comes later. We believe that esports is one of the world’s fastest growing industries today, and the success of teams like Team Vitality show that there is real opportunity for growth in this market. We are well on the way to building one of the world’s first billion-dollar esports teams.”

Images are available to download here and must be attributed to: Team Vitality: https://drive.google.com/drive/folders/1Ol4_J_pdo8S7c6W-YZ8tkgTrfOFPd4Xd

Rewired.GG is an esports venture fund investing in the talent and ideas that are driving the global growth of esports. In November Rewired.GG 2018 backed European esports leader Team Vitality with €20m of investment to create a global esports brand. The investment thesis of the Rewired.GG esports venture fund is that esports is at an exciting tipping point. The NFL earns around $50 per fan, but that number for esports is only $3.20*. Rewired.GG predicts that this upside potential revenue growth per fan combined with rapidly growing global audiences with rapidly-growing spending power, will generate significant future returns.

Team Vitality is an international esports organisation that was founded by Nicolas Maurer and Fabien Devide in 2013. The team has players from ten different nationalities and boasts some of the biggest players in the world, including the world No.1 Fifa player, world No.1 CS:GO player, and the world champion Rocket League squad. Team Vitality players compete in a portfolio of 9 games with 10 competitive teams. Team Vitality's main League of Legends roster competes in the League of Legends European Championship (LEC), which they joined after purchasing Gambit Gaming's spot. They are sponsored by Orange, Red Bull, Renault and Adidas. 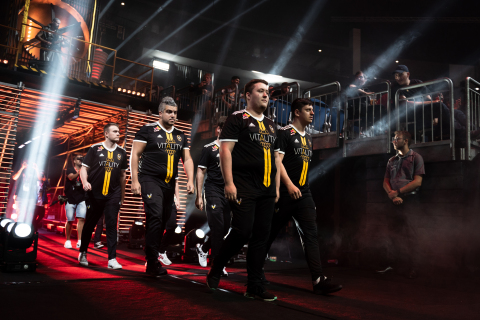