Energy mix rapidly decarbonizing with oil set to fall sharply from 2030 onwards, leaving natural gas as the biggest single source of energy
Share of electricity in the final demand mix will more than double from today’s level to 40% in 2050, with two thirds of that electricity provided by solar PV and wind
Global emissions will peak in 2025, yet we still exhaust the 1.5 degree carbon budget in 2028
The Energy Transition Outlook is DNV GL’s view on the energy future through to 2050 modeling 10 regions and the impact on 3 industry sectors. It is a forecast of the most likely path ahead

LONDON--(BUSINESS WIRE)--A technology-driven energy transition of staggering scale and speed will lead to a rapid decarbonization of the energy mix, with almost half our energy needs met by renewables by 2050, according to a new report. Plunging technology costs and market forces are driving the transition, but without bold policy intervention we will fall well short of the Paris climate goals. These are some of the findings of the third edition of the Energy Transition Outlook (ETO), which, owing to DNV GL’s independence and technical expertise, has become a respected voice inThe speed of the transition is demonstrated by a series of landmarks in the coming decade. Oil will peak in mid 2020s, capital expenditure (CAPEX) on grids and renewables will exceed fossil CAPEX by 2025, natural gas will overtake oil as the single largest energy source in 2026 and in 2030 the amount of energy produced will start to decline even in a world of growing GDP.

Electrification will transform how energy is produced and consumed. By midcentury, 40% of final energy demand will be met by electricity (up from 19% in 2017), 63% of which will be generated by solar PV and wind. Electrification is also having a dramatic effect on road transport and by 2032 half of new car sales globally will be electric. The intrinsic efficiency of electric engines means that despite a 75% expansion of the global vehicle fleet by 2050, road transportation will use less energy in 2050 than it does today.

“Existing technology can deliver the future we desire – including meeting the 1.5°C target set out in the Paris Agreement. So far, support for the energy transition has been too sporadic. For example, German, Japanese and Chinese support for the solar industry has been vital in transforming its energy mix and Norway’s and China’s uptake of EVs has been rapid because of government support. We need widespread policy supporting emerging technologies, and continuing the support in the build-up phase to accelerate the energy transition” said Remi Eriksen, Group President and CEO of DNV GL.

The technology exists to meet the Paris target, but policies must be put in place that promote greater energy efficiency, more renewables and industrial scale carbon capture and storage. DNV GL has proposed ten measures that could be implemented to limit global warming. These actions include; $1.5 trillion of annual investment in expanding and reinforcing energy grids, an 8-fold increase in renewable energy production by 2030 and a 50-fold increase in manufacturing of batteries for the 50 million electric vehicles needed per year, also by 2030. On the current path, CO2 emissions will peak in 2025 and will be about half the current level by mid-century, indicating a warming of 2.4 degrees by the end of the century.

Policy makers can be emboldened by the affordability of the energy transition. Global expenditure on energy is currently 3.6% of GDP but that will fall to 1.9% by 2050. This is due to a decline in spending on fossil fuels, and the rise of low-cost, efficient electrification that leads to operating savings which more than offset ongoing, substantial high CAPEX on grids. This is reflected in declining energy intensity – the amount of energy required per unit of GDP – which will improve at 2.4% per year through to 2050. Going forward, energy intensity declines faster than the global economy grows, which leads to a peak in world energy demand by 2030 – at that point humanity will start using less energy.

DNV GL is a global quality assurance and risk management company. Driven by our purpose of safeguarding life, property and the environment, we enable our customers to advance the safety and sustainability of their business. Operating in more than 100 countries, our professionals are dedicated to helping customers in the maritime, oil & gas, power and renewables and other industries to make the world safer, smarter and greener. 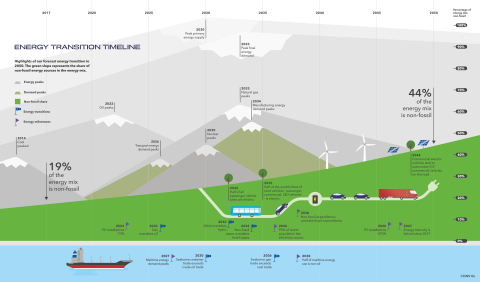