TAMPERE, Finland--(BUSINESS WIRE)--The City of Tampere’s newest district is being constructed over the railway tracks in Tampere city centre. The main landmark for the Tampere Deck district, the Tampere Deck Arena will be Finland’s biggest sports and event venue. The foundations for the building were laid on 5 September, and the Arena is set for completion by the end of 2021.

Designed by architect Daniel Libeskind, the Tampere Deck will bring together both eastern and western city districts on both sides of the railway tracks. Joining the old city districts, the Deck will be a completely new kind of living, breathing and inspiring environment. It will comprise residential services, business and trade premises, a hotel and an event venue. The railway line will serve to bring event guests into central Tampere even from more distant locations. The entire district in set for completion in 2025.

Architect Daniel Libeskind visited the site in August and was impressed by the progress. He feels that change and progress are key to urban environments. “History moves on. History is not just a footnote to things. Buildings that have a relationship with history have good material, good light, good sense of scale, speak the language of architecture and tell the story of Tampere, connecting past to the future."

According to the director Tero Tenhunen, as a centrally located multi-function facility, the Arena will be a unique venue on the global scale. “The City of Tampere has the ambitious goal of becoming carbon neutral by 2030. This new district allows for the further development of the railway station area and the entire central Tampere. In this way, we are able to promote a more tightly-knit urban environment, build great public transport connections, light transport pathways and smooth travel routes both locally, regionally and nationally. All of this is in support of the City of Tampere’s goals of attracting more people, improving the city residents’ everyday life and achieving carbon neutrality.”

The Arena’s over one million annual visitors are estimated to generate as much as EUR 28 million of added value to the city per year. 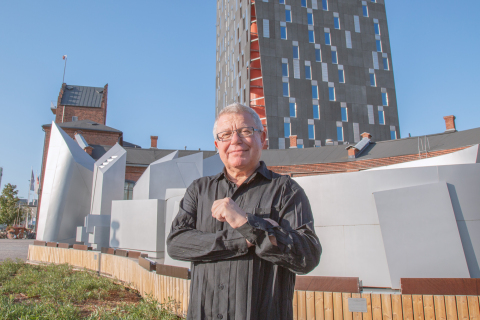 Daniel Libeskind and the model of Tampere Deck and Arena. (Photo: Business Wire)